Finals off: Salisbury takes down Davie, West-North stopped at halftime 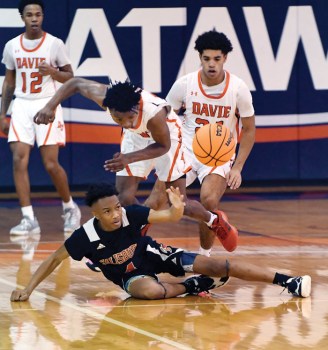 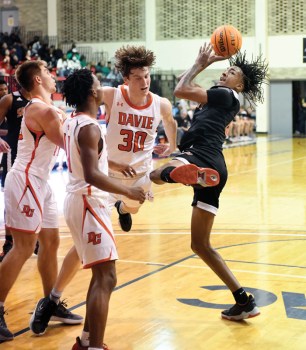 Salisbury's Juke Harris goes up for a shot as Davie's Blake Walser 30, Zaharee Maddox 11, and Tate Carney 10 defend. photo by Wayne Hinshaw, for the Salisbury Post 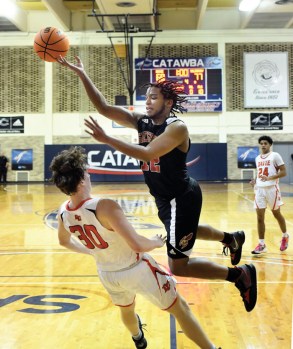 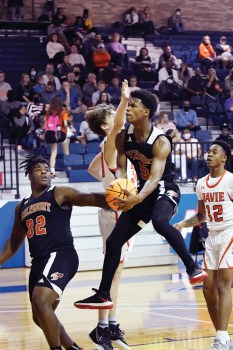 SALISBURY —  Before the horrifying event Wednesday night at Catawba College’s Goodman Gymnasium wiped out the rest of this year’s Christmas Tournament, there was some pretty good boys basketball.

The first championship-game finalist was set when third-seeded Salisbury eliminated favored Davie County, 83-78, in an exciting semifinal game. In the other semi, West Rowan led top-seed North Rowan 33-27 at halftime when an exchange of gunfire in the lobby injured two people and forced officials to cancel all remaining games.

The screams and cries of fleeing spectators were a stark contrast to the joyful sounds heard in Salisbury’s locker room some two hours earlier. The Hornets improved to 6-3 and won their fourth consecutive game, thanks largely to a lights-out first-half performance. SHS made eight of its nine 3-pointers and raced to a 51-33 advantage.

“That was the best offensive first half of basketball I’ve ever seen,” said first-year Davie coach Bruce Wallace. “If they played that way the whole year, they would win the 2A state championship and be a top-10 4A team.”

Sparked by sophomore Juke Harris, Salisbury led by as much as 57-36 early in the third quarter and then held on. Harris — a 6-foot-4 swingman — treated the court as his canvas, making tightly defensed shots with utmost creativity. He was a beyond-the-arc wizard, draining four shots from long distance and scoring 19 of his team-high 24 points in the first half.

“One of those nights when it felt like every shot was going in,” said Harris, who failed to make a basket and went 5-for-8 from the free throw line after halftime. “I felt the same way in the second half, but the threes weren’t falling. So I had to go through the lane and start picking up fouls.”

The night’s most spectacular shot closed the first half, when Salisbury’s Savion Freeman swished a 50-footer at the buzzer. Following a driving layup by Davie’s Zymere Hudson with a fraction under three seconds on the clock, Freeman took an inbounds pass from Nick Antosek and launched a splashdown that should be hanging in a museum.

“I wasn’t even the first choice,” Freeman said. “But in this day and age, plays like that can still happen. It worked out today.”

Davie staged a dramatic comeback in the final quarter, closing within five points on six occasions. Zaharee Maddox scored 20 of his game-best 31 points in the second half, mostly on snappy dribble drives from the edge and short pull-up jumpers.

“Just trying to get to the cup,” he said. “I gotta score. I gotta be a leader on this team.”

Teammate Tate Carney’s 3-pointer from the left corner drew the War Eagles within 81-78 with 17 seconds to play. The outcome wasn’t secured until Salisbury’s Cam Stout buried a left-side jumper with five seconds to go.

“I feel we can beat really good teams when we play like that,” Stout said after netting 23 points. “In the first half we moved the ball, communicated and tried to make each other better. In the second, Harris couldn’t get his shots to fall but he never let his head down. Still, he led by example and we all followed him.”