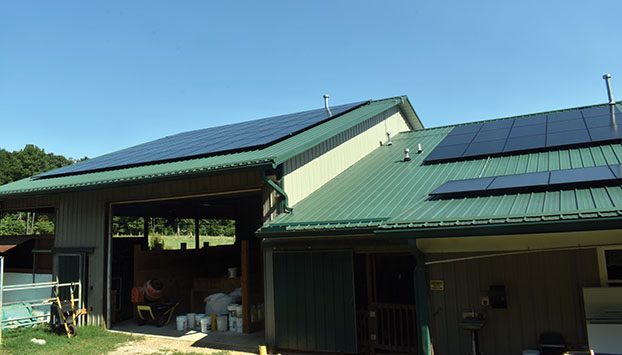 The panels on the roof of Fading D's creamery and milking parlor have helped the water buffalo farm slash its energy bill. Ben Stansell/Salisbury Post

David and Faythe DiLoreto of Fading D Farm know that from experience.

The couple started making mozzarella several years ago on their 64-acre farm just north of Salisbury. And they do it the traditional way: using milk from water buffalo.

The practice of transforming water buffalo milk into a creamy, soft cheese is centuries old and can be traced back to the Campania region in southern Italy. It was on a 2011 trip to Italy during which David and Faythe fell in love with the taste of Mozzarella di Bufala.

When they came back to Rowan County, they realized they couldn’t find the authentic cheese anywhere. “Fior di Latte,” which is mozzarella made from cow’s milk, is what is commonly found in grocery stores or on pizzas in the United States.

The couple acquired a small herd of water buffalo and now have 35 of the large creatures living on their farm. David and Faythe make and sell mozzarella, gelato and other water buffalo milk products in a store on site. A handful of restaurants and retailers nearby also carry their products. They sell water buffalo meat as well.

Fading D is one of about a half dozen operations that make mozzarella cheese the traditional way in the entire country.

Caring for the buffalo and making products with their milk is hard work, and it also requires a significant amount of energy.

That’s why the couple decided to install solar panels on the roof of their milking parlor and creamery last year. They were excited to find out in the spring they were awarded a $13,000 grant to help finance the project from the United States Department of Agriculture through its Rural Energy for America Program.

The USDA in September announced $53 million in investments to build or improve renewable energy infrastructure across North Carolina.

Fading D wasn’t the only local agricultural operation to benefit from the grants. Triple S Farms will use a $13,000 grant to purchase and install a grain dryer. The dryer will produce 21,000 kilowatt hours annually and save $4,000 per year.

“USDA continues to prioritize climate-smart infrastructure to help rural America build back better, stronger and more equitably than ever before,” USDA Secretary Tom Vilsack said in a news release. “We recognize that lowering energy costs for small businesses and agricultural producers helps to expand economic development and employment opportunities for people in America’s rural towns and communities.” 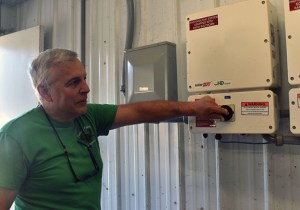 David DiLoreto checks the controls for the solar panel system on the roof of Fading D’s creamery and milking parlor. Ben Stansell/Salisbury Post

Fading D installed 29 panels on its creamery and milking parlor in the fall of 2020 after applying for the USDA grant. The panels now help power the cheese-making process, which requires both extreme heating and cooling.

Fading D uses 180-degree water to sanitize the equipment used in the milking parlor to extract fresh milk from the female water buffalo, which produce about as much milk as a goat despite their size. Then, the equipment has to be cooled down through refrigeration.

The extracted milk must be cooled, but it is heated again when it is processed.

More heat is used when David or Faythe use boiling water to stretch the mozzarella. The mozzarella curds, along with the gelato, are cooled quickly and stored in what’s called “blast freezers” that prevent crystals from forming.

The panels, David said, have helped cut the farm’s energy bill in half. The USDA grant also made the up-front solar investment pay off quicker than it otherwise would have.

“Without any incentives, it was a 15-year payback where the amount of energy you’d save would cover the cost of the system,” David said.

But after receiving the USDA grant, in addition to other incentives from the state and federal governments, David said the farm’s investment will start to pay off much sooner.

“It’s about a six or seven year payback,” David said.

The panels installed with the help of the USDA grant will keep the farm churning out fresh mozzarella for years to come.

More information about Fading D can be found at fadingdfarm.com.