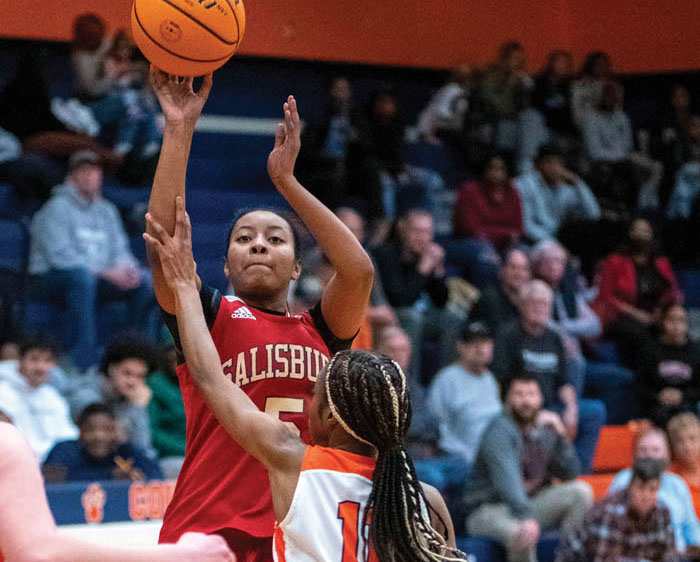 It returns with masks required for attendees and with A.L. Brown’s defending champion boys (from 2019) already eliminated by COVID, but at least the tournament is back on the schedule.

The pandemic canceled the tournament in 2020.

Top-seeded Salisbury is the clear favorite in the girls bracket, having already beaten Carson and West Rowan.

The Hornets (7-1) are a lot deeper than anyone else and they have a lot more options to turn to in case of foul trouble, injury or illness.

This group of Hornets, coached by Lakai Brice, has enjoyed great success, but except for the coaches, they haven’t won a Moir tournament. Salisbury’s last tournament triumph was in 2016.

Kyla Bryant (14.1) and Rachel McCullough (11.9) average double figures for the Hornets. Bryant started the season slowly due to a wrist injury, but she has averaged 16.5 points in her last six outings.

Salisbury opens the tournament at 3 p.m. today against eighth-seeded Davie (1-8).

Second-seeded Carson (7-2) is ranked 10th in 3A and owns several big county wins — two against North Rowan and one against West Rowan.

Carson won back-to-back Moir tournaments in 2017-18 under coach Brooke Stouder and still has two of the top players from the team that won the 3A state title last March. Catawba signee Mary Spry (17.2) and Hannah Isley (14.3) average double figures for the Cougars.

Carson’s losses were to Salisbury and to Charlotte Catholic. Catholic is ranked fourth in the state.

Third-seeded North Rowan (6-2) has lost twice to Carson but has crushed most of its opponents. The Cavaliers are ranked 11th in 1A.

Wilkerson,  a senior, plans to sign with Columbia International.

The Cavaliers will open the tournament at 10:30 a.m. today against sixth-seeded South Rowan.

Coach Ashley Poole led a senior group to a tournament championship in 2019.

The Mustangs (4-4) have a first-year head coach Bri Johnson Evans, who scored a ton of buckets in Goodman Gym for the Catawba Indians.

East lost big to North Rowan in its only county game so far, but is more experienced and better than it was last winter.

Hannah Waddell (14.3) is the leading scorer for the Mustangs. She missed East’s last game with illness, but the Mustangs still were able to win 55-52 at West Stanly. Clara Beaver (10.0) has played in the last five games for East and is the No. 2 scorer.

Sixth-seeded South (4-5) is another improved team under third-year coach Alex Allen. The Raiders have lost to North and West in county games, but they won their last two outings before the tournament, including a surprising conference victory against Central Cabarrus.

South hasn’t won a tournament since the Tracy Connor days of the early 1990s.

A.L. Brown (2-8) hasn’t played any of the Rowan schools, so it’s hard to say how the Wonders stack up. The Wonders own wins over Mount Pleasant and Robinson.

Salisbury has the most girls titles with 11, including nine straight from 2003-11. East has won eight times. Davie has won six championships, while North and West own five apiece

There’s no clear favorite in the boys field.

Second-seeded Davie is the pick for many, but top-seeded North Rowan, third-seeded Salisbury and fourth-seeded West Rowan have their share of support.

A.L. Brown’s disappearance from the bracket on Monday caused major changes in format, matchups and times for the boys. With the reduced field, a consolation game was added to Thursday afternoon’s slate to make sure everyone gets to play at least two games in the event.

A.L. Brown had been seeded sixth, so Carson and South Rowan moved up one spot each.

Top-seeded North Rowan was granted a first-round bye and won’t take the floor until Wednesday’s semifinals. History has proven the tournament bye to be good news and bad news. North would have a rest advantage on the third day, but teams that have a game under their belt tend to play more relaxed than teams that don’t on the second day.

In its first game in the tournament, North will be facing the survivor of the game between fourth-seeded West Rowan and fifth-seeded East Rowan.

North (7-1) rolled against South Rowan and also has beaten Carson (twice) and East Rowan in games that were competitive.

North’s lone loss was at Thomasville.

The last time North won the Christmas tourney was in 2015. North head coach Jason Causby has won three titles at the helm of Salisbury teams and is looking for his first at North.

Quashawn Carpenter (12.4), Derrick Hanson (12.0) and Amir Alexander (11.1) are the leading scorers for the Cavaliers, but they generally put eight or nine men in the scorebook.

Davie (6-3) is already deep into its 4A Central Piedmont Conference schedule and is battle-tested. The War Eagles have a scintillating guard in Zaharee Maddox, and they have a solid mix of quickness and toughness. There’s a lot of crossover from their football and basketballs teams.

Bruce Wallace is the new head coach of the War Eagles, who own a 61-47 victory over West Rowan. Wallace replaced Mike Absher, who coached the War Eagles to four Moir titles, including a recent one in 2018.

Salisbury (4-3) looks like a deep and dangerous team and has won its last two after falling at West Rowan. Head coach Bryan Withers has prolific scorers in Juke Harris (22.3) and Cameron Stout (19.0), and Mike Geter (10.3) also averages in double figures.

West Rowan (3-4) has beaten Salisbury, Carson and South Rowan, but lost its last two games before Christmas to Northwest Cabarrus and Davie.

Leading the scoring for the Falcons are Will Givens (13.7) and 6-foot-7 sophomore Levon Jacobs (10.0). Athan Gill, a talented junior, has played in the last two and scored 19 points.

West head coach Mike Gurley has guided six Moir champs, with the most recent title for the Falcons in 2016.

West takes on East Rowan in tonight’s finale at 7:30 p.m.

It will be the first Christmas tourney for second-year head coach Andrew Porter.

East has battled sickness and injuries, but lost 57-51 to North Rowan without Valley, so the Mustangs are capable of an upset.

Sixth-seeded Carson (0-8) has been more competitive than it sounds. Four losses were to Salisbury, West and North (twice).

Salisbury proved to be a bad matchup, but the Cougars hung in the other three most of the way.

Jay Howard (12.0) and Cameron Burlesyon (11.0) average double figures for the Cougars, while Mikey Beasley and Emory Taylor have turned in big games. Carson just hasn’t had multiple guys having big nights at the same time.

Carson won the tournament championship in 2017 under coach Brian Perry.

Seventh-seeded South (0-9) lacks size and depth and has gone through roster revisions, but the Raiders will look to be competitive under second-year coach Daniel Blevins, who will be in his first Christmas tournament.

Jacob Ritchie made it back from a football injury for South’s last game and scored 11 in his debut. Aaron Jones scored 10.