Ask Us: What is the status of Eaman Park residents told to vacate or face eviction? 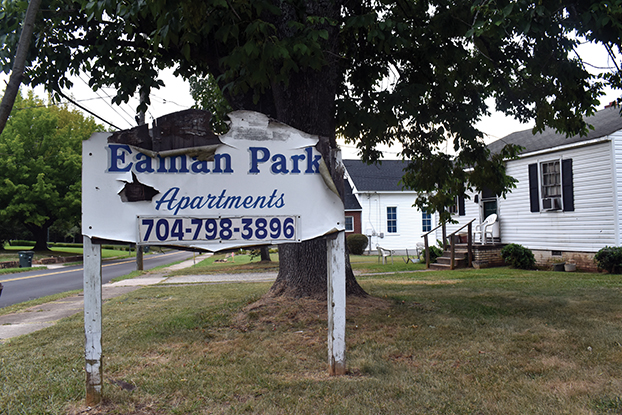 SALISBURY — Months after residents at Eaman Park were given weeks to relocate or face eviction, a reader was curious about the fate of the apartment complex and the people living there.

The people living at Eaman Park, which is located near Salisbury High School off Lincolnton Road, received a letter in early August informing them to vacate their units by Sept. 6. The letter was signed by landlord Mike Sharpe, who told residents he’d sold the property and that the units would be demolished to make way for affordable housing. The project was supposed to start on Oct. 1.

The original Sept. 6 date came to pass without action. Remun Roberts, who lives at the complex with his family, said the residents received another letter in September informing them that they would have until Jan. 31 to move out and would not be responsible for rent until then.

Sharpe told the Salisbury Post he intends to sell the property, but he declined to comment specifically on future plans for Eaman Park. He is still the owner of the property according to the Rowan County tax map, which lists 40 different addresses for the complex.

As of last week, the city of Salisbury had not received a request for a demolition permit at Eaman Park. The approval of a demolition permit is a 10-day process during which the city severs utilities, verifies ownership, holds a hearing and secures a $2,000 performance bond to ensure the completion of the work.

Sharpe did not confirm Jan. 31 as the specific move out date for residents, but he said they would be made aware of any changes. Sharpe declined to comment further on the matter.

Roberts said the extension came as a relief, but it hasn’t necessarily changed his family’s situation.

“It took the pressure off of us having to leave so quickly, but it basically delayed the inevitable,” Roberts said.

The communication between residents and Sharpe has been almost nonexistent for months, Roberts said. He describes the morale at the complex as low and said residents aren’t communicating with each other very much. Many residents, he said, still appear to be living at Eaman Park.

In the wake of the initial news of the evictions, Rowan Helping Ministries reached out to residents to lend rental support. The Salisbury nonprofit offered to pay the first month’s rent for people who needed to move quickly, Roberts said. While that offer is generous, Roberts said the problem he’s facing is finding affordable housing that accommodates his family’s needs and his two service dogs.

“One of the biggest problems we’re having is one finding a place big enough for me, my wife, my son and two dogs,” Roberts said. “A lot of places, once you tell them you have a service dog and they don’t want dogs or any type of animals here, they find loopholes of saying you’re not qualified for this place.”

Affordable housing appears to be in short supply in Salisbury right now. The most recent Census data, which doesn’t include the ongoing inflation spike, show median gross rent in Salisbury is $786, an 18% increase from 2010. Help could come next year as 17 housing projects are in various states of approval, including about 160 affordable housing units confirmed to be ready for residents next year and the potential for 70 more, according to numbers provided to the Salisbury Post earlier this month.

Roberts said he and his wife both have jobs in Salisbury and don’t want to leave the area. However, the lack of nearby housing has forced them to look outside Rowan County.

With the new move-out date approaching, Roberts said his family is still facing an uncertain fate.

“It’s something me and my wife talk about every night and it’s something that scares us because we don’t know what to do,” Roberts said.

As he continues to search for housing, Roberts said he welcomes any help or interest from landlords who are renting affordable units.