On Rockwell Board of Aldermen, Brewer hopes to improve strength of community 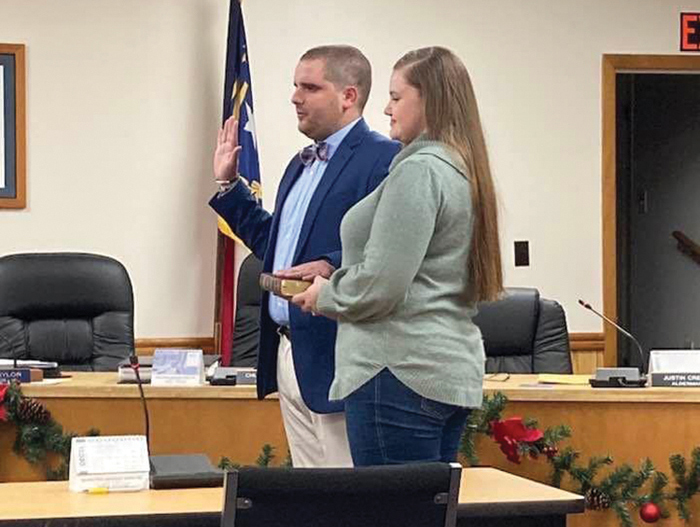 Submitted Photo Dillon Brewer, left, was sworn in on Dec. 14 to his first term on the Rockwell Board of Aldermen. Brewer will serve on a board that includes Chris Cranford, Stephenie Walker, Lizz Johnson and Justin Crews. Beau Taylor is the town’s mayor.

ROCKWELL — Dillon Brewer has his sights set on building the strength of his community.

Whether it’s with Cheer City Riot, finding the right job or civic clubs, Brewer says he’s putting the community first in his life. He’s hoping to do more for the Salisbury-Rowan community and, more specifically, the town of Rockwell as the newest member of its Board of Aldermen.

Sworn in about two weeks ago, Brewer is a Rockwell native. He attended Rockwell Elementary and Erwin Middle before graduating from East Rowan High in 2012.

He moved out of his parents’ house when he was 16 and was a Horatio Alger scholar, which assists high school students who have faced and overcome great obstacles. Brewer also was active in student council, becoming the high school vice president for the state of North Carolina.

Shortly after high school graduation, he went to work for Gerry Wood Automotive Group, becoming a Swiss Army knife-type employee and rising to the positions of commercial sales and finance managers. He says the company also enabled him to become involved with community organizations, including the United Way.

In 2018, with help from wife Kelsey and other Carolina Panthers friends, Brewer established Cheer City Riot in 2018 — a local Carolina Panthers fan club affiliated with the Roaring Riot organization. The club has raised thousands of dollars for charity.

Then in January, after buying a house, Brewer decided to take a step back from management to become more involved in the community. Today, he works for Cloninger Toyota and is a member of the Salisbury and Rockwell Civitan clubs. He’s president-elect of his hometown club.

His drive for improving the strength of the community drew him to file for Rockwell Alderman in July. Just to get the lay of the land, he attended board meetings for nearly a year before choosing to file.

Among other things, Brewer says he looked at Rockwell, compared it to nearby municipalities and decided the town didn’t have signature community events.

“That’s something I’m passionate about and I wanted to kind of lend my expertise,” Brewer said.

When incumbent alderman Chuck Bowman decided to run for mayor against Beau Taylor, it left an opening for Brewer. After filing closed, there were just as many candidates on the ballot as open seats. But just for good measure Brewer finished second among the five candidates with 150 votes. Only Chris Cranford, with 188 votes, finished ahead of him.

He joins a board that also features Timothy Justin Crews, Stephenie Walker and Lizz Johnson.

Looking ahead to his term, Brewer says he wants to organize events such as a concert in Rockwell’s park or a food truck festival as well as giving ongoing events more publicity. Brewer said building threads that tie the Rockwell area together will be particularly important as new residents move in.

Brewer says he wants to make sure town employees are compensated fairly for their work “so that we’re not losing them to other municipalities.” He also hopes to see more growth in Rockwell’s downtown area.

“And when those new businesses come to town, we should celebrate them with a ribbon cutting,” Brewer said.