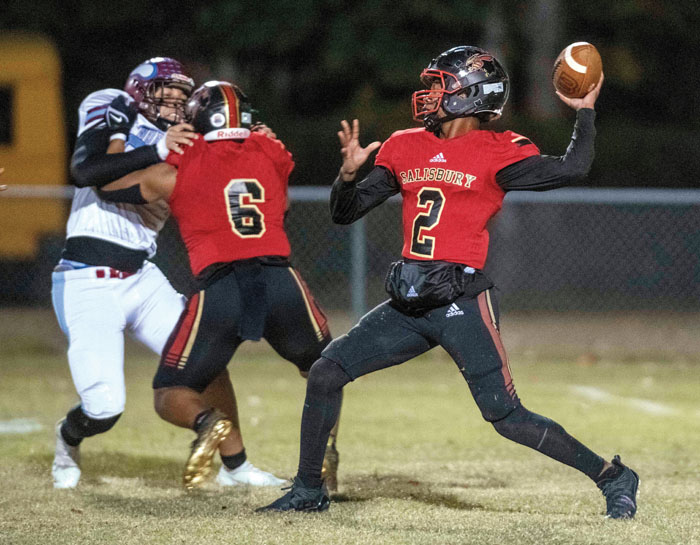 The competition for that honor was even deeper and stouter than usual, but Geter accounted for 45 touchdowns in a 12-game season. The lefty was a dominant offensive player on a team that was the county’s best by quite a bit.

No one questioned Geter’s running skills. At 6 feet tall and 175 pounds, he’s swift and elusive. He averaged 10 yards per touch as a freshman.

But his arm surprised people. He can sling it for distance and with accuracy. Just as important, he recognized when to throw it and where to throw it.

Eight outstanding athletes — Salisbury’s Geter and JyMikaah Wells; North Rowan’s Jae’mias Morrow, Jeremiah Alford and Amari McArthur, and West Rowan’s Noah Loeblein, Peter Williams-Simpson and Akin Robinson — put up numbers that would have been good enough to be Rowan County Offensive Player of the Year in many seasons.

There also was Carson’s Hunter Burris, who set a rushing record for Carson quarterbacks, and juggernaut back Carter Dowd, who set unofficial Carson records for longest pile moves and yards after contact. And then there was Salisbury’s Marcus Cook, who set multiple program receiving records for the Hornets.

What made all the impressive statistics really exciting is that this was a shorter season than the ones to which we’ve grown accustomed.

To start with, schedules were reduced from 11 to 10 games.

Then the scheduled West Rowan-Salisbury, East Rowan-North Rowan and Carson-Mount Pleasant games could not be played.  That meant nine-game regular seasons. South Rowan was the only county team able to tackle the 10-game schedule it expected to play.

West was an offensive machine. No doubt about it.

Loeblein enjoyed a monster aerial season — 119 of 221 for 2,334 yards and 25 touchdowns. There were some interceptions along the way, but it still is one of the 10 greatest passing seasons in county history. It included a county-record six-TD night. Loeblein’s net rushing yards were barely positive, but he did score six rushing TDs and he even caught a touchdown pass.

McArthur set school marks for receiving yards and TD catches. He had 54 catches for 1,191 yards and 16 TDs.

Freshman QB Alford had a top-10 all-time season in the county as far as yards of total offense. He rushed for 899 yards and threw for 1,885, while accounting for 38 touchdowns. The youngster’s 2,784 yards of total offense actually edged North legend Mario Sturdivant’s finest season (1999).

Workhorse Wells flattened people, rushing 139 times for 1,209 yards and 21 TDs for the Hornets.

But then there was Geter. His season had to be among the best in Rowan County history.

Not in terms of yardage because Salisbury’s offense cashed in repeatedly on short fields created by their defense and special teams. The Hornets didn’t have to drive 80 yards very often.

Geter’s yardage stats also were deflated by a season stuffed with blowouts. Salisbury averaged 53 points and rarely gave up anything in the regular season, so games were usually over by halftime, with a running clock ready to kick in. It’s not like Geter needed to throw it around in the second half.

But it was his touchdown numbers that were eye-popping.

His 91 carries produced 28 trips to the end zone, which means he scored a touchdown on 31 percent of his rushing attempts. Even with Morrow and Wells consistently finding the end zone, Geter paced the county in rushing touchdowns.

Geter attempted only 115 passes, about half as many as Loeblein and Alford, but 17 went for touchdowns, and his interception rate was extremely low. His quarterback rating was through the roof.

“We were asking Mike to replace a very good quarterback (Vance Honeycutt), who led us to a state championship,” Salisbury quarterbacks coach Carson Herndon said. “We knew Mike was talented, but there was no way to anticipate him being as good as turned out to be. He was really, really good. We didn’t miss a beat.”

When Salisbury headed to Polk County, a perennial playoff team, on opening night, everyone knew the Hornets’ defense would be a handful and everyone knew Wells would get his rushing yards, even behind a rebuilt offensive line. But Geter turned out to be the story. He was 6-for-7 passing for 136 yards and two touchdowns. He rushed for three touchdowns.

Geter was on his way. He never really looked back.

“We thought he could do the job at quarterback, but we honestly thought there would be more of a learning curve for him than there was,” Hinson said. “His learning curve was pretty minuscule.”

Geter picked up on the nuances of playing quarterback in a hurry. Besides the quick feet and the strong arm, he proved a fast study as far as the mental part of the game.

“He’s a one-rep kid,” Herndon said. “Tell him what you want him to run, and he goes out there and runs it. For a coach, that’s huge.”

The Thomasville game was tight for a while, and Geter responded with 228 passing yards and two touchdown, plus three rushing touchdowns.

Against North Rowan, in a game Salisbury eventually blew open and won 60-0, he had four rushing touchdowns and was 6-for-8 passing for 102 yards and a score.

Geter was voted Central Carolina Conference Offensive Player of the Year by the league’s coaches.

“His athletic ability speaks for itself, and, on top of that, he’s a great competitor,” Hinson said.

Geter is quiet by nature, but he became a capable leader for the offense.

“He’s kind of got a calming influence on everyone around him,” Herndon said. “He’s a good one. The scary thing is he’s only going to get better.”

Geter is currently one of the standouts for Salisbury’s basketball team. Herndon hopes to recruit him to join the baseball team in the spring.

Sports obituary: A.L. Brown’s Sherrill could shoot with the…