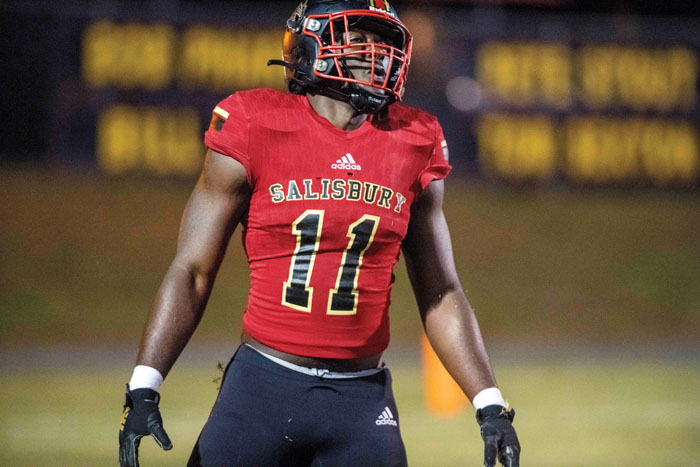 SALISBURY —  Salisbury linebacker Jalon Walker is preparing for the Under Armour All-America Game in Orlando, so it may be the least surprising announcement of the century that he repeats as Rowan County Defensive Player of the Year.

“Jalon is one of a kind and I’ve been fortunate to coach him and fortunate to know him,” Salisbury head coach Brian Hinson said. “At the high school level, you’re very lucky if you get one like Jalon in a lifetime. When your best player is one of the best students in the school and one of the hardest workers in the school, you count your blessings.”

If you’re wondering if anyone has ever been recognized as the county’s top defender two years in a row, it has happened before, but not since the 1970s. North Rowan linebacker Brent Chambers won back-to-back in 1977-78, while Salisbury defensive lineman Danny Winecoff was honored in 1973-74.

Unless you’ve been marooned on an island somewhere, you’re aware that Walker, a Georgia recruit, is a role model for all student-athletes locally and a national figure on the football field.

He has been named the Central Carolina Defensive Player of the Year by the league’s coaches the last two seasons. He won the WSOC-TV Super 22 Award as the area’s top player.

Long, fast and smart at 6-foot-2, 220 pounds, Walker is a consensus top-50 player nationally and, while he didn’t win it, he was a finalist for the Butkus Award for high schoolers, which means he was rated one of the top six linebackers in the country.

Walker’s junior year included 19 tackles for loss and eight sacks and such accolades as Gatorade Football Player of the Year for North Carolina and Rowan County Athlete of the Year.

He definitely had more than his share of tackles, TFLs and sacks, plus at least two forced fumbles, two safeties, three blocked kicks and quite a few pass breakups.

He scored five touchdowns. In the North Rowan game, he scored on a fumble recovery, a touchdown catch and by breaking a long run on a faked punt.

He did what he did as far as the defensive stats with every opponent game-planning to stay as far away from him as possible.

“Every snap for every team we played started out with, ‘Where is No. 11?'” Hinson said. “That was the first consideration for everyone. See where Jalon is and try to go somewhere else.”

Mike Herndon has wrapped up his teaching career at Salisbury, but he had the joy of coordinating a Salisbury defense that was dominant the first 11 games of the season and posted eight shutouts.

“We always sent Jalon to the field side (wide side),” Herndon said. “That took two-thirds of the field away from our opponent and meant we only had to defend the remaining third. Jalon is strong and fast, but his biggest asset is he’s a coach on the field. He could make all the calls and he could see things and make adjustments. He made our job easy.”

Walker is the son of a football coach, Catawba head man Curtis Walker, so his advanced grasp of X’s and O’s isn’t surprising.

Basically, the entire first-team defensive unit was honored as All-Central Carolina Conference. Nick Hall was the CCC Lineman of the Year, while Jaden Gaither was arguably the county’s second-best linebacker.