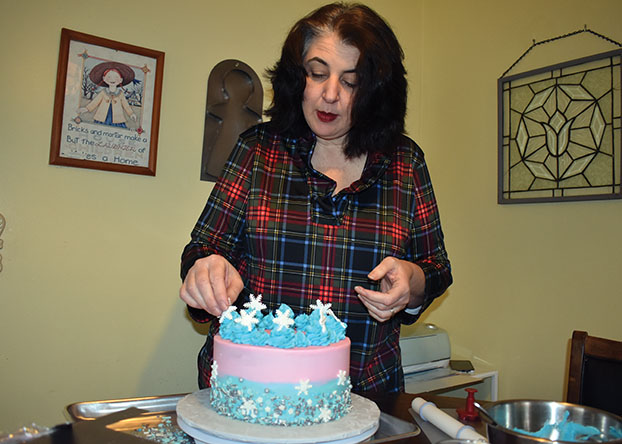 SALISBURY — At first glance, the kitchen is unassuming.

Faint yellow cupboards border a refrigerator, sink, microwave and oven. A raised table and chairs offer a place to enjoy an informal meal. Even on closer inspection, the kitchen looks like almost any other found in homes across Rowan County.

The only evidence that anything out of the ordinary happens in the room is the corner to the left of the sink where dozens of silver piping tips with uniquely-shaped openings hang in rows on a rack. Next to the tips is a silver stand mixer and tablet, plugged in and ready to play whatever crime show is up next.

That’s where the magic happens.

“It’s the tiny kitchen that could,” Peg Fisher said. “There’s a lot of baked goods that roll out of here.”

Fisher is the founder, owner and sole operator of Coyote Trail Cakes — a micro-bakery she runs out of her longtime home on the street in Salisbury for which the company is named. For the past decade or so, Fisher has been pumping out intricate cakes and decorated cookies for birthdays, holidays and community events.

Even though she’s made thousands of sweets over the past decade, Fisher seems to still be grappling with the idea that she’s trusted to deliver on someone’s most important day.

“I consider it a privilege to be able to add to their memories for the day,” Fisher said.

Although she’s now a wizard with fondant in her hands, Fisher’s first experience making a cake was a literal flop.

When Fisher was a teenager, she and her sister decided to celebrate the Fourth of July by baking a cake and decorating it with patriotic pride. It was a blueberry and strawberry dessert that might’ve tasted great had they gotten the chance to try a slice.

As Fisher was transporting the cake from the garage to the house for consumption, it flopped out of her hands and onto the floor.

She gave cake making another shot about a decade later, when she was in her mid-20s and staying at home to take care of her young children. At first, she only made cakes for her family members to enjoy on their birthdays.

“It was just for fun, for family,” Fisher said. 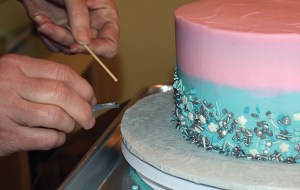 Cake making requires concentration and sometimes tweezers to ensure that every sprinkle is in the right spot. Ben Stansell/Salisbury Post

Everything changed when Fisher attempted to create a large, looped fondant bow for her sister’s milestone birthday party. It was her first crack at molding chocolate into a specific shape. She spent hours googling advice and trying various techniques before forging her own method. The result was exactly what she envisioned.

“Once I figured out how to do that, everything else followed quickly,” Fisher said.

Other people took notice of her cake decorating skills.

“That was really when people outside of the family started asking for cake,” Fisher said.

What started as a hobby eventually transformed into a home business. Fisher launched Coyote Trail Cakes in 2012 after having her quaint kitchen inspected by the state of North Carolina. The name of the business was a point of debate in Fisher’s household, with some family members pushing for a more intuitive bakery name like “Peg’s Sweets” or “Fisher Cakes.”

Fisher is happy she stuck with the name.

“I love the sound,” Fisher said. “I love the uniqueness of Coyote Trail. I love living out here. And nobody else is going to have the business name Coyote Trail Cakes.”

As she started taking on more clients, Fisher began to conquer increasingly outlandish and challenging designs. For a Halloween party, she mounted three sweet skulls in a towering display. A bachelor’s party required her to recreate a cooler brimming with ice cubes (white chocolate) and several craft beers, each bearing a different label that Fisher recreated with her food color printer.

Tackling a seemingly impossible creative challenge is what Fisher loves.

“How do you do it and make it taste good too?” Fisher said. 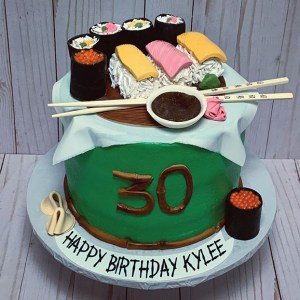 One of Peg Fisher’s almost unbelievable cakes made to help a sushi lover celebrate their birthday. Photo submitted.

The cake making process starts with a quick consultation. The concept, colors and taste is hashed out in her dining room, on a phone call or over text. Fisher reserves the first two days of each week for talking with clients and responding to online inquiries.

On Wednesday, her kitchen and dining room turn into a cake assembly line. Thursday and Friday are when the decorating happens. Fisher spends hours hovering over cakes in the kitchen corner, with NCIS or Blue Bloods playing on her tablet. Formulaic crime shows are the perfect cake-making companion — mindless enough to allow for maximum concentration, but still comforting and entertaining.

Once the cakes are complete, Fisher walks them down a flight of stairs into her finished basement. There she places them in front of a cardboard trifold covered with a colorful background and snaps a glamour shot.

Fisher delivers cakes or her clients come and pick them up themselves. For the tallest, multi-tiered creations, Fisher uses what’s called a “Stable Mabel” to keep the cake upright in her moving vehicle.

Fisher’s cakes have traveled long distances, taken to family gatherings as far north as Maryland and as far south as Florida.

The COVID-19 pandemic didn’t completely stop her business, but it resulted in people ordering much smaller cakes for condensed celebrations. This year, the regular orders have started pouring back in.

“Cake seems to be healing, a celebration,” Fisher said. “… Particularly this year after last year, the cake is really something to look forward to.”

Although she enjoys making strangers happy with her cakes, Fisher still loves to bake for her children’s birthdays. She also made her son’s wedding cake. But when it’s her time to celebrate being another year old, she turns to her favorite dessert: pie.

One day, Fisher would like to open a storefront where she can make cakes in a professional kitchen and have ready made cakes for people to walk in and purchase at any time. That would require a significant amount of investment and for her to take on a few other employees, breaking from her solitary style.

For now, she’s happy to keep pumping out cakes from her home in the tiny kitchen that could.

More information about the business can be found online at coyotetrailcakes.com or by calling 704-213-8419.