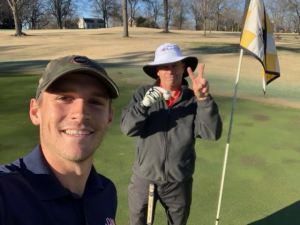 The three-day tournament features eight games on Tuesday, eight more on Wednesday and third-place and championship games on Thursday. There won’t be fifth-place and seventh-place games this year.

There was no tournment in 2020 due to the pandemic. The defending champions (from 2019) are West Rowan’s girls and A.L. Brown’s boys.

There are no undefeated teams entering the tournament.  Top seeds are the Salisbury girls and the North Rowan boys. Seeds were based on pre-Christmas records.

The first day of action concludes with the 4-5 games. That will be an East Rowan-West Rowan doubleheader.

Jeff Childress made a hole-in-one on Wednesday while playing nine holes at the Country Club of Salisbury.

Childress used a 6-iron on the 172-yard No. 6 hole to make the second ace of his career and to highlight a 39.

GARS members played a round at The Revival at the Crescent Golf Club.

North Rowan receiver Amari McArthur was a first team pick on the Friday Nights in Carolina 1A All-State team.