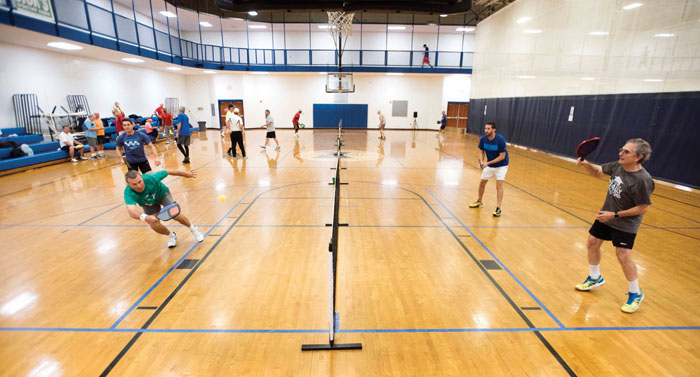 SALISBURY — The J.F. Hurley Family YMCA plans to expand its pickleball offerings with courts that will let people enjoy the great outdoors and expand the facility’s ability to host tournaments.

Hurley YMCA Executive Director Richard Reinholz said the empty space behind the facility is underutilized and the organization received donations to build a set of eight courts. The total project cost is about $250,000, which will be split into two phases.

Phase one, about $175,000 of the cost, will go toward installing the courts. Phase two will involve installing lighting and spectator seating amenities. The YMCA received a $100,000 donation followed by another $50,000 in matching funds from a local foundation as well as a combined $25,000 from other donors to help fund the project. Fundraising is still underway to pay for the second phase.

Reinholz said the organization is keeping its donors under wraps at the moment, but it plans to have a reveal next year.

The goal is to start construction in late March and finish the project in May.

In the meantime, the YMCA already has permanent lines for nine pickleball courts in its main gym.

“We embraced pickleball early on,” Reinholz said, noting local tournaments have drawn people from across the state and the sport is continuing to grow.

He said the expanded courts will give more opportunities to members and allow the facility to host small- and mid-sized tournaments that will add to Salisbury’s tourism industry. Reinholz also credited local pickleball enthusiasts such as Jon Post for building the local profile of the sport.

“Primarily it excites me as an opportunity,” Reinholz said. “Pickleball is a very affordable sport to play, a sport that is easy to learn, doesn’t require a ton of experience to be competitive and can be played to an advanced age.”

Jo Anne Poplin, a YMCA member and pickleball player, said she got into the sport more than five years ago after she came to the Y for something else but got sucked in.

Poplin said the sport is easy to learn, but there’s always room for improvement.

Toby Richards, another member, got into the sport through a friend after she retired. She said she is excited about the new courts.

“Any time we get anything new for pickleball we are extremely happy,” she said.

Gary Wirkus plays at the YMCA most days. While his wife takes classes, he plays pickleball. Wirkus likes the sports because people of all ages can play. He thinks the new courts will be good for the Y.

“It’ll be nice to have it out there,” Wirkus said. “It’ll bring a lot of people to the Y.”