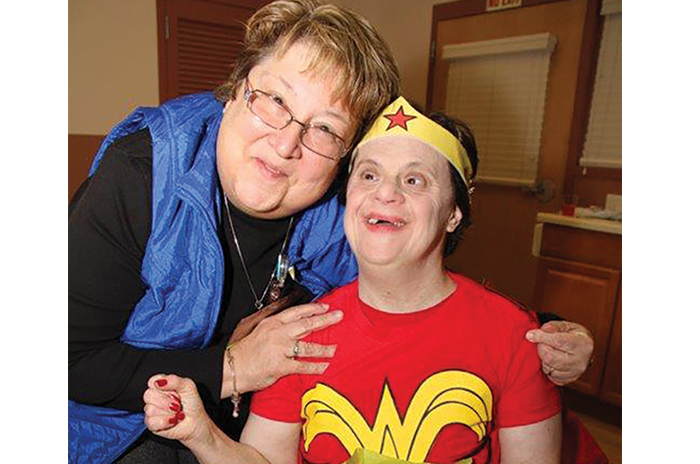 Photo submitted - Nancy Nance, left, with Lorraine, a Holy Angels resident who became one of her best friends.

SALISBURY — Nancy Nance’s epiphany came when she was working in the aisles of the Guyes department store on Fisher Street.

Nance wanted to do something different — something more meaningful than selling clothes.

“As I got older, I felt like I needed to be doing something different,” Nance said.

Back home in Salisbury after graduating from Western Kentucky University, Nance worked a couple of years in radio before her dad, Clarence V. Nance, purchased an interest in Guyes and was named president and general manager. For six years, she worked for her dad.

In the early 1980s, an idea that lived in Nance’s head since her teenage years bubbled to the surface when she started investigating the possibility of joining Sisters of Mercy — an international community of Catholic women who take vows to serve people, particularly women and children, who suffer from poverty, sickness and a lack of education. They also take vows of poverty, chastity and obedience.

At the time, Nance wasn’t the typical new, Catholic sister — fresh out of college or high school. She was 31 when she entered in 1982. Now, after 36 years with a ministry in Belmont known as Holy Angels, Nance is retiring. It’ll be the first time a nun from the Sisters of Mercy will not act as a full-time staff member.

It’s also not a traditional retirement.

“It’s a known fact in religious life that you don’t retire. You get recycled,” Nance said.

About Nance’s retirement, Holy Angels CEO Regina P. Moody said she has been “the epitome of service to the differently able.” Moody said Nance has spent decades of her life “bringing joy and love to residents in a consistently caring and compassionate way.”

While she’ll no longer be on the campus, with plans to travel and learn, Nance anticipates remaining connected and volunteering when she’s able. In the immediate future, she plans to participate in a 30-day retreat in California as well as other religious-oriented programs. A friend and his wife also offered Nance the chance to travel to Italy next year.

Today, Sisters of Mercy says it takes at least seven years to become fully professed, which includes a two-year candidacy phase, a two-year novitate phase and a temporary profession phase that could take anywhere from three to six years. A full or perpetual profession is the final part of becoming a sister of mercy.

Nance worked for about a year at St. Joseph’s Hospital in Asheville when it was owned by the Sisters of Mercy. In 1985, she was first assigned to Holy Angels — a ministry of the Sisters of Mercy founded in 1955 that cares for people with intellectual developmental disabilities and medical conditions.

Then, she was called to take photos for a presentation by the woman who’s now the CEO, Regina P. Moody.

“She knew I did photography and asked me to take pictures for her presentation, but what I discovered is that when you look at something through a camera lens it’s a different perspective,” Nance said. “It was a turning point.”

Nance saw joy-filled personalities instead of people with disabilities.

She’ll retire at the end of the year as vice president of community relations, but she spent a large swath of her time — 16 years — living in a community group home with three Holy Angels residents and another sister. During her stay, Nance met Lorraine, a resident who became a good friend. She took Lorraine to movies or dinner, and the two became close friends.

Nance says she also values relationships formed with families who placed their children with Holy Angels — a difficult decision.

“Every parent thinks and hopes they will raise their own sons and daughters, but sometimes the medical needs are so great that you just can’t, especially if you have other children … I think we kind of take that, maybe some of the worry, away because the medical needs can be so great.”

Most families who send children to Holy Angels are from the Charlotte region — particularly Gaston, Lincoln and Mecklenburg counties. But North Carolina residency is the main criteria for admission. So, there are residents from the mountains and the coast.

Entering the next phase of her life, Nance looks back at her 31-year-old self, hoping for a way to put her faith into action, as a different person than she is today.

“I have found joy and fulfillment as a person and as a sister of mercy,” Nancy said. “It has deepened my relationship with God and the people I work with and the sister with whom I have lived. The experiences that I have had have enriched my life.”

To learn more about Holy Angels in Belmont, go to holyangelsnc.org.