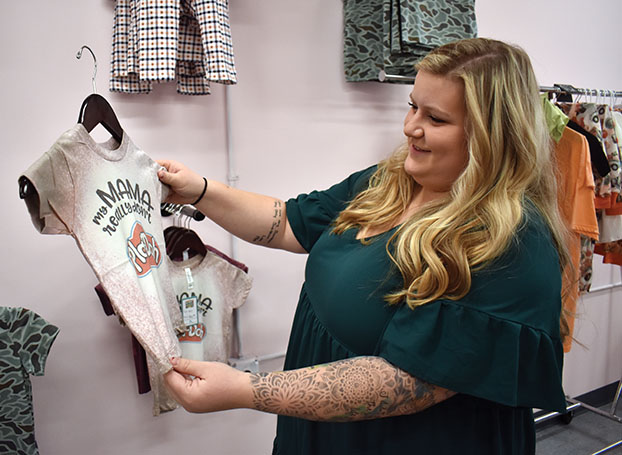 Candis Newton didn't plan on owning her own clothing store, but the pandemic prompted her to lean into her passion for fashion. Newton recently opened Southern Roots Clothing in Spencer, where she offers clothes for people all ages. Ben Stansell/Salisbury Post

SPENCER — Candis Newton blames her fashion sense on her sisters.

“I’m 10 years younger than my sisters,” Newton said. “So, they treated me like a Barbie doll.”

That meant dressing her up in whatever outlandish outfit they could concoct. Even when Newton was old enough to pick out her own clothes, she typically chose outfits that stood out from the crowd.

“Growing up, everybody always said I dressed like Hannah Montana,” Newton said. “I always wore the weird stuff. My mom has always told me that I can put the ugliest thing out and put it on and make it look pretty. I’ve always had that knack for dressing goofy, but it comes together in the end.”

Despite her propensity for putting together eye-catching ensembles, Newton didn’t pursue a clothing-related career. At least, not until the pandemic suddenly changed her course. Now, Newton is the owner of Southern Roots Clothing. The store, located at Park Plaza near Spencer’s new municipal complex, opened to the public on Nov. 13.

Being a business owner wasn’t in Newton’s plans when she graduated from East Rowan High School in 2016 and enrolled at Wingate. There, she studied elementary education before moving back home to Rowan County to raise her children. Newton got a job as a store manager at Sprint before transitioning to the same role for a T-Mobile shop in Kannapolis.

That’s where the 23-year-old was working when the pandemic started.

“They shut my store down, which forced me to be at home,” Newton said.

Around the same time, Newton and her husband, Kenneth, gained custody of their niece and nephew. With four children to help care for, Newton started considering a career change that would allow her to be home more often.

Newton didn’t figure out what that change would be until her mom asked her to make a Kiss shirt. After she completed the shirt — a tie dyed tee with the rock band’s painted faces in the middle — Newton posted a picture of it on her Facebook page.

“It kind of blew up,” Newton said. 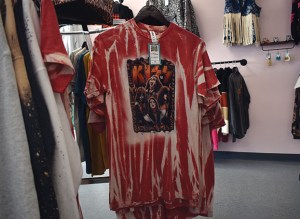 After designing a shirt similar to this for her mother, Candis Newton discovered that she could turn her propensity for fashion into a business. Ben Stansell/Salisbury Post

Newton started to design more clothing to sell to interested online buyers. Eventually, she started making children’s clothing with bright patterns and seasonal designs. She tapped into an underserved market by offering clothes for boys and matching sets for siblings.

“It’s super hard to find men’s and little boys’ stuff,” Newton said. “I realized that because my son, who is now 2, was born, it was so hard for me to find upscale clothing for him. I wanted to start on my own just to see what I could do and to see if people would have interest in it, because all boy moms run into the same issue: they can’t find cute clothes they want.”

The kids clothing line propelled the business to new heights. Newton started to show off and sell her creations in a Facebook group that has since grown to more than 2,000 people. To spread her brand further, Newton added kids clothing “reps” who model outfits on social media. Each rep, all of them under 10 years old, is given outfits to wear and a discount code to disseminate to friends and family members.

“It’s definitely helped a ton,” Newton said. “It makes me feel good to see all the little kids excited in their clothes. It’s nice to see someone excited to wear something you picked out.”

One of Southern Roots’ current reps is 5-year-old Reestyn Poplin, who started modeling the store’s clothes a few months ago. Her mother, Regina, shoots pictures of Reestyn in the clothes and posts them on Facebook.

“Reestyn loves clothes and any chance she gets to be sassy, she takes it,” Regina said. 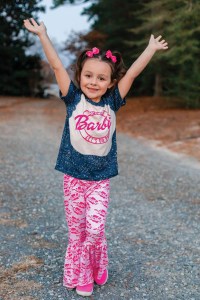 Reestyn Poplin is a brand rep for Southern Roots, which means the 5-year-old models many of the store’s outfits. Her mother is the photographer and posts the photos to social media. Photo submitted.

The popularity of the kids’ clothing line inspired Newton to open a physical location to go with her online business. Her sights fell on Spencer and Park Plaza, a formerly defunct shopping center that recently underwent a renovation to accommodate the town’s municipal offices. Newton was attracted to the large parking lot in front of the shop, but she was also excited to be a part of something new.

“I’m happy to be in Spencer,” Newton said. “I’d looked in Salisbury and I looked in Mocksville, but Spencer needed something.”

Newton is one of just a few businesses open at Park Plaza. She thinks she won’t be the last.

“It’s gone a lot better than I thought it would,” Newton said. “I was very nervous that I wouldn’t get foot traffic and people wouldn’t be interested in coming over here. Thus far, I haven’t had that issue at all.”

Poplin, who started with Southern Roots when it was online only, now gets excited every time she goes to the shop to pick out a new outfit, Regina said. They usually leave with a few more clothes than expected.

“I definitely have to put a cap on her, because if it was up to her, she’d pick out one of everything in the store,” Regina said.

Even though the kids clothing brand might be the store’s top seller, Southern Roots also carries clothes for grown ups too, including prominent southern clothing brands. The shop sells locally made soaps, tumblers and accessories as well.

Newton enjoys being a business owner, but what she loves more is having a career that involves her kids.

“I needed something I could involve my kids in and that is a big reason why I have the kids clothing line,” Newton said. “They’re involved in it, they get to model, they get to feel like they’re a part of this.”

Southern Roots is open Tuesday through Saturday from 11 a.m. – 6 p.m. Holiday hours may be different. More information can be found online at southernrootsclothing.com.co or by calling 704-762-8634.