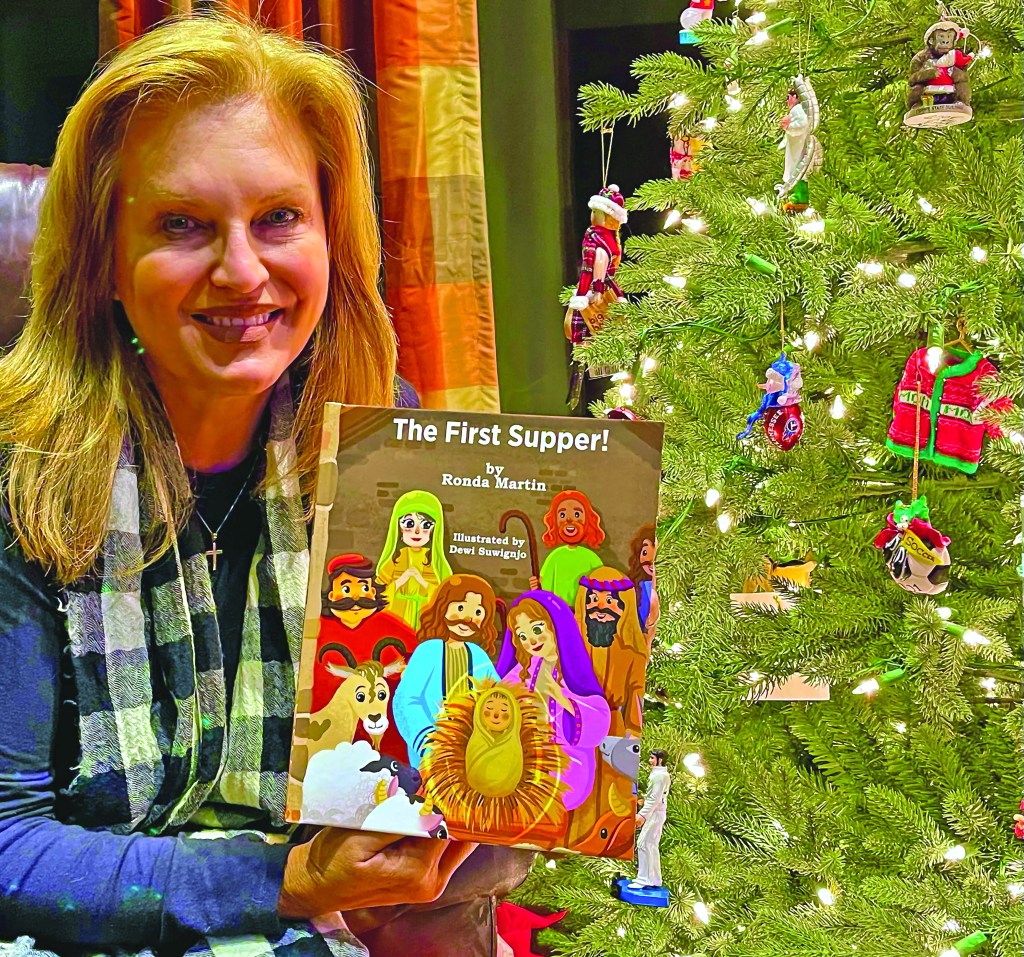 Submitted — Rowan County resident and author Ronda Martin has recenly published a Christmas children's book told from the perspective of the innkeeper's wife during the night Jesus was born.

SALISBURY — Christians are familiar with the traditional Christmas story of Jesus’ birth more than 2,000 years ago. But Rowan County resident and author Ronda Martin is telling the story from important characters who aren’t often mentioned: the innkeepers.

Martin is the author of “The First Supper!,” a children’s Christmas book told from the perspective of the innkeeper’s wife, Naomi, who shared with Mary and Joseph a meal shortly after Jesus was born in the adjacent stable. Martin hopes her story will spark new traditions and help get back to “the reason for the season” rather than the commercialism that has developed for the Christmas holiday.

Martin’s love of the written word sparked when she was young and growing up in a small town in South Carolina. She loved to read, even if it was just the cereal box.

“I became a good reader,” Martin said. “I fell in love with words.”

When she was in college, Martin would help other students with their assignments and essays, which always received good grades. Though she didn’t finish school, she’d eventually move to Nashville and begin writing comedy bits for The Nashville Network, which was known as TNN and was an American country music-oriented cable television network. Martin even contributed to the TV show Hee Haw, which began in 1969 and ended after 23 seasons.

While in Nashville, Martin met her husband, Girl. Her first publication was a motorsports column with TNN in 1994, and it’s a time she’ll forever remember because she shortly discovered she was pregnant with her son, Ford. Martin and Gil then moved to North Carolina.

When Ford was a third grader at Concord First Assembly Academy, Martin was a “homeroom mom.” She recalls gathering with other homeroom moms around 2004 to discuss how to host the annual Christmas program. While some mothers had planned on a traditional program, Martin wanted to keep with the tradition of the Christmas story of Jesus’ birth while also holding the interest of children just old enough to find themselves all too familiar with the “same Mary, Joseph and Jesus story.” In fact, the performances hadn’t been too different from the programs she recalls participating in as a child in the 1970s, she said.

The book is called “The First Supper!” because Naomi gathers leftovers from her kitchen to provide the family who was staying in the stable. Leftovers included figs, grapes, olives, bread, goat cheese and lamb. When Martin and other homeroom moms first presented this story to the third graders during the Christmas program, she said the students had all kinds of questions about the food, which most had never tried.

“Children are like sponges and if you get them early and just plant that seed, that seed will grow,” Martin said.

Martin would later tell the same story around Christmastime when she began working with a ministry in Winston-Salem. It was then that one of the directors encouraged her to put the story into a book.

“The directors said you need to write this and put it in a book,” Martin said.

Despite some delays due to COVID-19, the book was published in March 2021 with Premium Press America. Illustrations are by Dewi Suwignjo, a woman in Indonesia who Martin said she was happy to work with. Martin said while she can knock the story out in just one afternoon, edits and illustrations take much longer.

The book is dedicated, in part, to Martin’s godchildren Tabor and Remy, whose mother often baked cookies and other goodies with them. That inspired Martin to include at the end of the story two recipes using ingredients that could have been consumed at the time of Jesus’ birth. Martin said she hopes this will inspire other families to read the story and cook together, and maybe, spark a new Christmas tradition.

“I’m hoping that this will help guide children back to the reason for Christmas,” Martin said. “There are only two holidays in the whole year that are Christian holidays. That’s Christmas and Easter. And both of them have been hijacked by a fat man in a suit that brings stuff to you and a bunny that brings you candy. And both of those take away from the focus.”

Martin is currently working on more children’s stories that tell stories of the Bible from a different perspective. “The First Rain” is one she’s working on that details the story of Noah’s Ark, but from the perspective of the animals, who have a lot of questions for the angels about boarding the ark. Another book is the Easter Sunday story told from the perspective of a rabbit who witnesses angels rolling away the stone of Jesus’ tomb.

Martin said copies of “The First Supper!” are sold out on Amazon, but those interested can purchase the book for just under $16 at www.sundaycirclefarm.com.