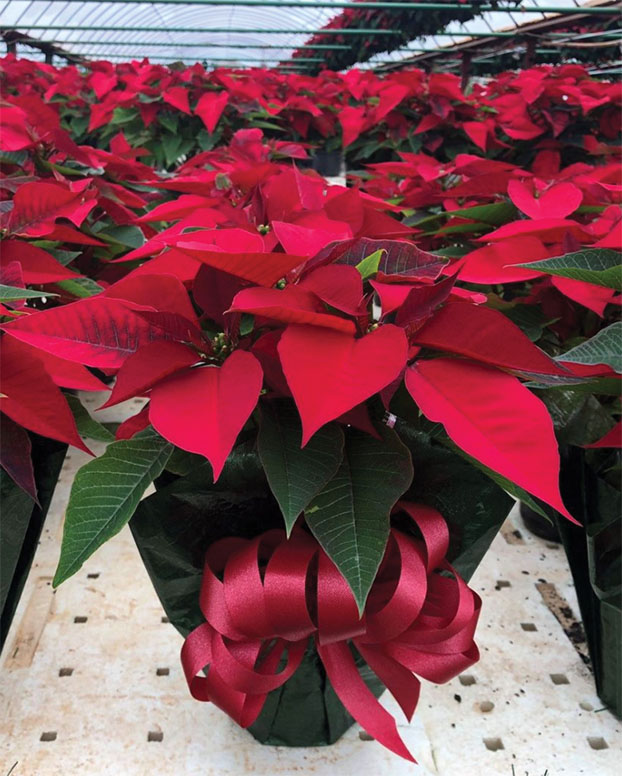 Local growers had a successful poinsettia season this year, selling out of the plants that have become ubiquitous with Christmas. These poinsettias are from Patterson Farm. Photo submitted.

SALISBURY — The Patterson family usually has a few poinsettias placed around their home on Christmas Day — leftovers from that weren’t purchased by customers.

That won’t be the case on Saturday.

For the first time since Patterson Farm started growing and selling the red Christmas flower more than four decades ago, the farm completely sold out of poinsettias this year.

The plants didn’t even make it past the first weekend of December, which is when the farm took to social media to announce they would fulfill previous orders, but would not accept any more. The farm couldn’t even secure extra poinsettias from other growers in the region, who were also running low on supply.

“We’ve never been totally out,” said Doug Patterson, who oversees the farm’s greenhouses. “We’ve always had options. When you’re sold out with options, that’s a lot better situation.”

Patterson Farm wasn’t the only local poinsettia grower to have a successful season. Rockwell Farms, a major producer of plants located in Rowan County, also sold out of poinsettias this year.

Poinsettias have been a symbol of Christmas in America for nearly two centuries, but the plant’s roots are actually in Mexico and Central America. Joel Roberts Poinsett, the first U.S. minister to Mexico, is credited with bringing the plant to America in the 1820s. Since its arrival, the poinsettia has become one of America’s favorites, a decoration almost as abundant as Christmas lights or stockings. The plant has been around long enough for urban myths to grow around it, including  the untrue belief that the poinsettia is particularly poisonous to dogs.

According to the Future Farmers of America, poinsettias are America’s top selling potted plant, contributing a staggering $250 million to the nation’s economy annually, even though the market for them is only about six weeks long.

Patterson Farm — a family owned operation in Mt. Ulla, known for its tomatoes, strawberries and other fresh produce — started growing poinsettias more than 40 years ago. It was a way for the farm to make use of its greenhouses at a time when no other plants would normally be in them.

The farm itself is run by Doug, his wife Michelle, brother Randall and wife Nora, as well as a few of their children. Doug’s daughter Victoria and Randall’s son Taylor are especially involved, including with the growing, packaging and delivery of poinsettias.

Patterson Farm receives young poinsettia in mid to late August. The plants arrive at just a few inches tall, but can grow to be almost 20 inches by the time the holiday season comes around. Patterson Farm usually grows between 12,000 to 15,000 plants, depending on the year. Most of them are red, the most popular color, but the farm does grow some white and multi-colored poinsettias as well.

In the midst of the pandemic last year, Doug said the farm grew fewer plants. The decision was justified when fewer people came looking for the colorful Christmas staple. Churches who normally filled their sanctuary with the flowers didn’t order. Schools who typically sold the plants to raise money didn’t host those fundraisers.

The goal each Christmas is to have as few poinsettias leftover as possible, both because the plants are perishable and because they’re about as in demand after Dec. 25 as pumpkins are after Halloween.

“Normally we’ll try to donate (leftovers) if we can,” Doug said. “We’ve got nursing homes we’ll take them to. We’ve got neighbors we’ll get them to. There’s some events right after Christmas we can take some to decorate, but really they’re not worth very much at all after Christmas.”

With that in mind, Patterson Farm decided to cut back again when it placed its order in late summer.

Except, the demand returned to what it had been before the pandemic.

“Last year, I think a lot of people didn’t buy poinsettias that normally buy them and this year, I think they decided to buy again,” Doug said.

As a result, Patterson Farm has been struggling to fill orders placed by longtime customers. Doug says it has been stressful on the farm’s sales team, but admits it’s a good problem to have.

“You’d much rather sell them all,” Doug said.

And this year, they did.

While Patterson Farm sold fewer poinsettias in 2020 before bouncing back this year, Rockwell Farms sold out of the plants both years. Bryan Abramowski, co-owner of the business, said the pandemic has actually caused people to buy more flowers. In the spring, the grower sold out of flowers. In the fall, all the mums were bought.

With 36 acres of greenhouse space and another 36 acres outside, Rockwell Farms produces millions of plants every year that are sold in grocery stores throughout the southeast, mid-Atlantic and Deep South.

Rockwell Farms’ widespread presence in chains such as Food Lion and Walmart might explain why it had more success selling poinsettias last year than Patterson Farm, which focuses its sales more locally.

Rockwell Farms has been growing poinsettias since it opened in 1979 and now grows about 500,000 poinsettia plants every year. They grow the flowers from cuttings, which are imported and planted around the Fourth of July. After the plants spend about five months growing in greenhouses, Rockwell Farms starts shipping them to sellers a week or two before Thanksgiving.

Rockwell Farms likes to sell out by Dec. 15. The grower beat that mark this year, running out of plants around Dec. 7.

“We actually had to cut a few customers off,” Abramowski said.

Although sales were promising this year, neither Doug nor Abramowski plan on planting more poinsettias next year.

Doug said he doesn’t know what to expect in 2022 and Abramowski said Rockwell Farms will not make a “huge overcorrection” when it orders cuttings in the summer.