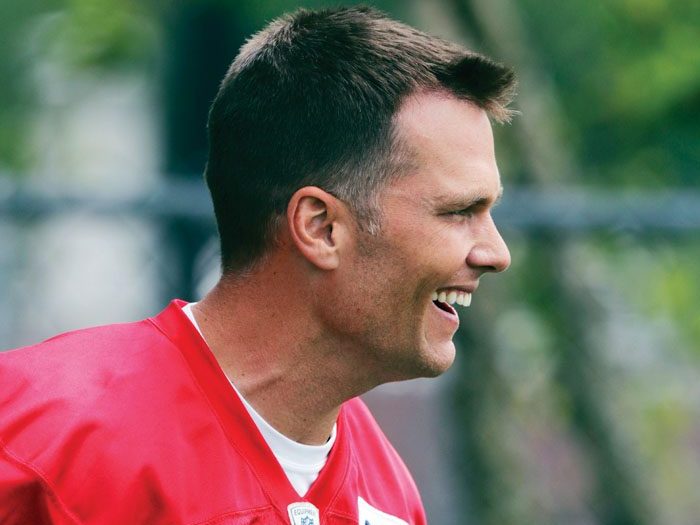 After losing to the Saints, Tampa Bay’s Tom Brady said, ‘We didn’t play our best game, obviously. None of us. ... So we’ve got to figure out how to move on and do a better job.’ (AP File Photo/Charles Krupa)

CHARLOTTE — Tom Brady is expected to be extra motivated, which is normally not a good sign for his next opponent.

The seven-time Super Bowl champion will look to bounce back from an embarrassing 9-0 loss last week to the New Orleans Saints when they face the struggling Carolina Panthers on Sunday.

Brady even struggled to hook up with his longtime favorite tight end Rob Gronkowski, as the duo connected on just two of 11 passes.

“I don’t know. We didn’t play our best game, obviously,” Brady said. “None of us. Just a bad day, so we’ve got to figure out how to move on and do a better job this week.”

It marked only the third time in Brady’s illustrious career his team had been shutout and just the first time in the past 15 years, snapping a streak of 255 games including the postseason.

Brady will look to take out his frustrations on the struggling Panthers (5-9) on Sunday, a team that started the season 3-0 but has lost nine of its past 11 games and has yet to find an answer at quarterback.

The Buccaneers (10-4) can wrap up their first NFC South title since 2007 with a win and end the Saints’ four-year run as division champions. Tampa Bay won the Super Bowl last season as a wild-card team.

Brady leads the NFL with 4,348 yards passing and 36 touchdowns. He’s four TD passes away from joining Aaron Rodgers as the only players in league history to throw at least 40 in a season three times.

“The mental game for him is so good,” Panthers coach Matt Rhule said. “I mean he’s playing chess while a lot of people are playing checkers. He’s so advanced with knowing what people are going to do against him, recognizing coverages, recognizing where the blitzers are coming from and knowing where to go with the football. … I just have so much respect for the way he plays.”

Cam Newton will start for the Panthers, but Sam Darnold will also see some playing time  — although it’s unclear how much. Darnold has missed the past five games with a shoulder injury.

Darnold was 4-5 as the team’s starter before being placed on injured reserve Nov. 12. Newton is 0-4 as a starter.

The Panthers still have a vested interest in Darnold, given they are on the hook for more than $18 million next season after picking up the fifth-year option on his contract. Newton will be an unrestricted free agent after the season.

Bell was released earlier this season after appearing in five games with the Baltimore Ravens.

“I could play as many plays as they need me to,” Bell said. “I think I am in great shape. I haven’t been playing football games, but just with my workout regimen, my diet and the things I have been doing over the course of this whole year — this is literally the best physical form I’ve ever been in. I’m excited. Whatever the coach asks me to do, I’m going to go out there and do it.”

Bell’s arrival reunites the 29-year-old with former Steelers wide receiver Antonio Brown, whom the Bucs anticipate will play this week for the first time since a Week 6 victory at Philadelphia.

In addition to returning from an ankle injury, Brown is coming off a three-game suspension for misrepresenting his COVID-19 vaccination status. The Bucs are counting on him to make a difference with Godwin out after suffering a season-ending knee injury against New Orleans last Sunday, and with Evans (hamstring) week to week after also getting hurt against the Saints.

The Panthers were left without a kicker last week against Buffalo when Zane Gonzalez injured his quadriceps about an hour before kickoff. Gonzalez has since been placed on injured reserve and replaced by kicker/punter Lirim Hajrullahu.

The 31-year-old Hajrullahu made five extra points while kicking for the Dallas Cowboys earlier this season, but has never attempted a field goal in the NFL. However, he has plenty of experience. He was an all-star in the Canadian Football League, where he made 239 of 287 field-goal attempts and won a Grey Cup with the Toronto Argonauts in 2017.

The Panthers won their first two games at Bank of America Stadium to open the season 2-0. But they’ve stumbled at home since, losing their past five games by an average margin of 8.2 points.

Carolina has allowed 27 points per game in those five losses.

OPENING LINE: Buccaneers by 11, according to FanDuel SportsBook.

BUCCANEERS PLAYER TO WATCH: QB Tom Brady: The Bucs were shut out last week by the Saints, so he’s expected to be highly motivated. He is 5-3 against the Panthers, including a Super Bowl win over Carolina in the 2003 season. He also beat Carolina twice last year after leaving New Orleans for Tampa Bay.

PANTHERS PLAYER TO WATCH: WR D.J. Moore: One of the more underrated wide receivers in the league, Moore has at least four catches in 13 games, and at least six catches in seven games. He needs just 14 yards receiving for his third straight 1,000-yard season.

KEY MATCHUP: Brady vs. Carolina secondary: The Bucs have the top-ranked passing offense in the league, but are struggling with injuries. The Panthers are No. 2 in the league in pass defense, but just lost yet another cornerback for the season in A.J. Bouye. That means Carolina is without its top three cornerbacks to start the season. The Panthers still have some depth there after acquiring 2019 NFL Defensive Player of the Year Stephon Gilmore and C.J. Henderson in trades earlier this season. Both will start vs. Tampa Bay.

KEY INJURIES: The Buccaneers have lost WR Chris Godwin for the remainder of the season to a torn ACL, a hefty blow to the team’s Super Bowl title defense. Also WR Mike Evans and RB Leonard Fournette are dealing with hamstring injuries. … The Panthers will be without kicker Zane Gonzalez, who had made 17 straight field goals prior to injuring his quadriceps last Sunday during warmups.

SERIES NOTES: The Buccaneers have won four of the last five meetings, including a series sweep last year with Brady at quarterback. … Cam Newton’s last win as a Panthers starter came against the Buccaneers on Nov. 4, 2018. He has lost 12 straight starts with the Panthers since.

STATS AND STUFF: The Buccaneers can clinch the NFC South with a win or a New Orleans loss. … Tampa Bay is 4-3 on the road this season. … Brady threw for 341 yards and had four TDs — three passing and one rushing — in his last meeting with Carolina. … Brady has thrown for more than 295 yards and had a QB rating of 90 or better in three of his last four games vs. Carolina. … He needs four TD passes to join Aaron Rodgers as the only players in NFL history with three seasons with 40-plus TD passes. … The Buccaneers have allowed just 21 sacks, tied for fewest in the NFL. … Tampa Bay is second in the league in third-down conversion attempts at 46.4%. … Evans needs 91 yards receiving to become the first player ever with 1,000 yards receiving in each of his first eight seasons. But his status is unclear. … TE Rob Gronkowski has at least 50 yards receiving in four of his last five games. … LB Lavonte David has 26 forced fumbles since 2012, tied for third most in the NFL. … Carolina has lost its last five home games. The Panthers have not won at Bank of America Stadium since Week 2. … The Panthers have lost nine of their last 11 games overall. … QB Cam Newton is 0-4 this season as a starter. … Panthers S Jeremy Chinn needs two tackles to join Jon Beason and Luke Kuechly as the only players in team history with 100 tackles in each of his first two NFL seasons. … With one more sack, Panthers DE Brian Burns will have 10. He would join teammate OLB Haason Reddick in double digits, giving Carolina the only tandem with at least 10 sacks apiece. Reddick has 11 sacks.

FANTASY TIP: If Evans plays this week, he could be a major factor. In two games last season vs. Carolina with Brady under center, Evans caught a combined 13 passes for 181 yards with two TD catches.