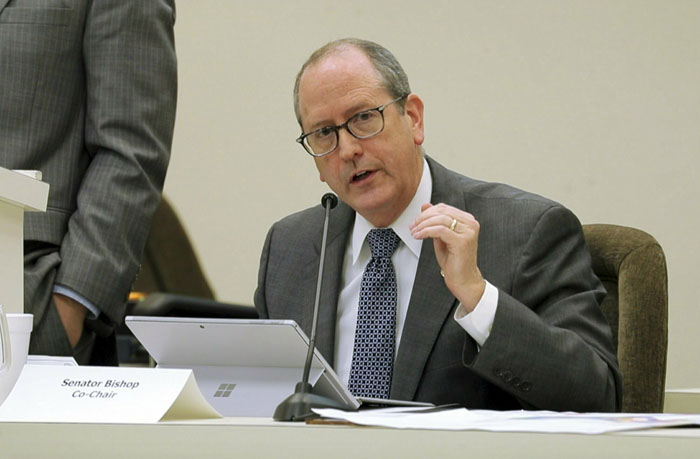 RALEIGH — A North Carolina congressman has filed a federal lawsuit to demand more transparency from state Supreme Court and Court of Appeals judges whose votes this month prompted the state to push back its 2022 primary by 10 weeks.

The complaint U.S. Rep. Dan Bishop, a Charlotte-area Republican, announced Wednesday night and filed earlier in the day criticizes a string of private court decisions, arguing three private votes run counter to “a well-established tradition of public access to the votes of individual justices and judges in the decisions of these courts.”

“It’s breathtaking hypocrisy: judges require legislators to draw maps, debate maps, and vote on new maps in public,” Bishop said in a news release. “But they rule on them in the deepest, darkest recesses of the court system. No matter which side of the issue you’re on, every North Carolinian has a right to this information and everyone should demand transparency from our judges. There are no grounds whatsoever for our courts to operate in secret.”

On Dec. 6, a three-judge appeals court panel voted minutes before candidate filing was set to begin to suspend filing for U.S. House and North Carolina General Assembly races. The court told state and local elections officials not to begin accepting candidates for those seats, prompting the state Board of Elections to turn away from the State Fairground in Raleigh several candidates for office, including U.S. Rep. Alma Adams, a Democrat who traveled from Charlotte to file her paperwork.

But later that night, “a vote of the majority of judges” on the 15-person Court of Appeals reversed the panel’s decision  and allowed candidate filing to resume.

In both decisions, the judges used a lesser-known “conference” process where they are free to discuss the issues at hand privately and then announce a ruling publicly without providing a tally of how the vote went or which judge voted in which direction.

On Dec. 8, the state Supreme Court suspended candidate filing and ordered the 2022 primary election to be delayed by 10 weeks from March 8 to May 17 as lower courts examined whether the GOP-drawn legislative and congressional maps were unlawfully drawn for pure partisan gain and to dilute the voting power of racial minorities.

Bishop believes Democrats and Republicans alike should demand transparency for all three decisions and said he is particularly interested to know the vote of Jimmy Ervin, a Democratic justice on the state Supreme Court who filed for office before possibly voting shortly thereafter to halt candidate filing.

The high court’s order did not disclose how each of the seven justices voted. The signature written on the decision was illegible and appeared over the words “For the Court.”

In his lawsuit, Bishop notes that Amy Funderburk, clerk of the state Supreme Court, told him by email that Justice Tamara Barringer, a registered Republican, signed the order postponing the election. Bishop claims that neither Barringer nor any other Supreme Court worker responded to his request for a breakdown of how the seven justices voted.

Bishop, who accuses the high court and Court of Appeals of depriving him of his First Amendment rights, is also asking the courts to pay his attorneys’ fees for this case.

“The First Amendment-protected interest will retain no significant value unless the deprivation of access is remedied almost immediately and in any event well prior to the general election 2022,” Bishop wrote in the suit.