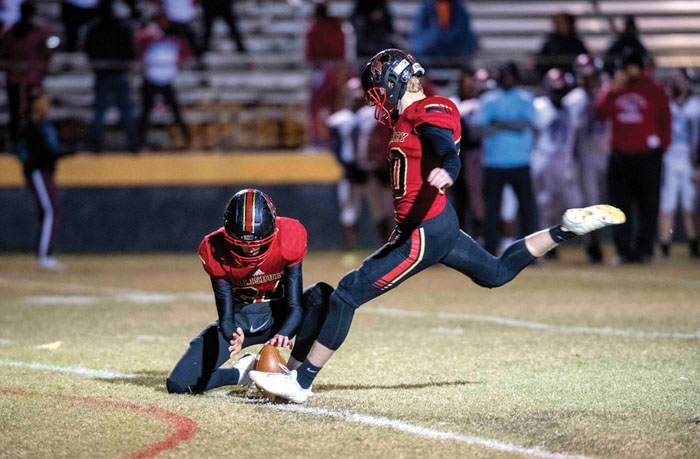 SALISBURY — There’s a first time for everything, and Salisbury kicker Wade Robins is the first to repeat as the Post’s Special Teams Player of the Year.

Technically, Robins is being honored twice in the same year. He was honored for the COVID-delayed 2020 season that was played back in the spring of 2021.

His contributions were more obvious in the spring, as he made pressure-packed, late-game field goals to get Salisbury past Burns and North Davidson. Obviously, Salisbury’s state championship wouldn’t have happened without Robins.

This season, field goals weren’t a big factor for Robins. He only kicked one, and it came in a romp, not with Salisbury’s season on the line.

“We were scoring touchdowns on every possession,” Robins said with a laugh. “It’s not like we were getting stopped and having to kick field goals.”

Breaking in a new holder this season (Will Webb), Robins kicked 61 PATS, a dozen more than he kicked in the spring.

That’s an extraordinary number and essentially the same thing as scoring 10 touchdowns. But it’s not the reason he was picked for the special teams honor over a host of return men who dodged would-be tacklers and housed kickoffs and punts.

Kicking off is where Robins was tremendously impactful in every Salisbury game. He’d put the opening kickoff in the end zone, force opponents to start on their 20 and then watch a Salisbury defense that produced eight shutouts go to work with savage efficiency.

“The goal was to make them start deep because we knew we were going to win the field-position battle every time,” Robins said.

Some first halves were played exclusively on one side of the 50. It was a vicious cycle. Salisbury kicked off, got a three-and-out or a turnover, and scored with a short field. Then everything repeated. And then the Hornets replayed it. Over and over.

“If we won the toss, we deferred every time,” Salisbury head coach Brian Hinson said. “Wade was going to put it in the end zone most of the time, and even if he didn’t, even if they fielded the ball at the 1 or the 2, our kickoff team was very good at tackling them inside the 25. We’d get a stop, and most high school punters aren’t going to average more than 30 yards, so we’d usually start our offense on their side of the field.”

Salisbury averaged a county-record 53 points per game. Some of those points were provided directly by the special teams and defense, but a lot of it was the offense cashing in on golden opportunities ands short fields. Quarterback Mike Geter accounted for a staggering 45 touchdowns, rushing and passing. Running back JyMikaah Wells put the ball in the end zone 21 times.

Robins is an excellent goalkeeper for strong Salisbury soccer teams. He thought of himself basically as a soccer player for a long time.

“About the middle of my junior year is when I saw that I might have college scholarship possibilities in football,” Robins said. “That’s when I started focusing more on kicking footballs. The kicks in the two sports are completely different.”

Robins has the ability for long-range field goals and has attracted quite a bit of college interest. He got an offer from Elon. Catawba is recruiting him. Several more schools have gotten involved lately.

“We haven’t had him for a lot of practices because of his other sports, but we’ve backed Wade up to 54 yards, and he can drill it,” Hinson said.

With the unusual sports calendar created by COVID last school year, Robins actually competed in golf, baseball, football and soccer for the Hornets, all in the same semester.

In other words, he’s an underrated athlete.

Vance Honeycutt’s graduation last spring left Salisbury looking for a new punter. Robins stepped in there, as well, and while the Hornets didn’t have to punt often, he was more than adequate.

“He was way better than average,” Hinson said. “The thing about Wade is he just doesn’t rattle. That kick he made at Burns in the spring, 39 yards, 3.5 seconds on the clock, kicking from the left hash, was something. Not a lot of high school kids would have made that one.”