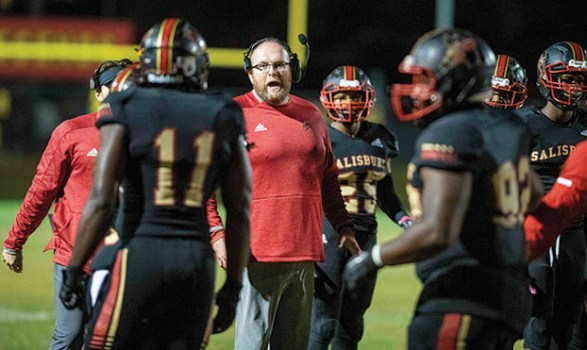 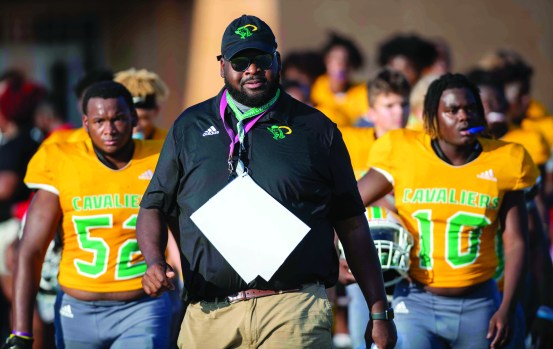 It’s the fifth time Hinson has been honored and the third season in a row. It’s the first award for Pearson, who was in his second season of guiding the Cavaliers.

Hinson coached a dynamic 11-1 crew that scored 53 points per game, while allowing 5.4 per game.

Statistically, the Hornets were the most overwhelming team in modern Rowan County history, probably the most dominant team as far as pure numbers since the 1940 Price Red Devils pitched a shutout for an entire season.

Led by Georgia recruit Jalon Walker, Salisbury was exceptionally talented, but Hinson challenged the Hornets to be fantastic, not just very good, and they responded. They won their three county games by a combined 178-0, including a 60-0 win against a good North Rowan team. The Hornets won playoff games 49-6 and 49-0.

The Hornets lost in the third round at Maiden and couldn’t get back to their third straight title game or win their second straight title, but the raw numbers from this season will still make jaws drop 25 years from now. If some were disappointed with 11-1, well, that just means the Hornets spoiled them.

Salisbury was sixth in 2A in the final MaxPreps rankings and was 38th in the state.

Against long odds, North went as far as Salisbury in the playoffs. North lost at Robbinsville 50-47 in the third round of 1A.

It should be noted that Robbinsville won again the next week and played in the regional final.

North (8-4) was seventh in the final MaxPreps 1A rankings.

North went 3-0 in overtime games. That tells you something. It’s amazing to play three OTs in one year and far more amazing to win all three.

If the Cavaliers make one more play, there likely would’ve been a fourth overtime game against West Rowan. They lost that one 42-35.

“Our kids were resilient and they are tough kids,” Pearson said.

North didn’t have a good showing at all in the Rowan County Jamboree scrimmage as the season began and was fortunate to get past South Rowan in overtime when the Cavaliers officially opened the season at home on Aug. 27.

“You know, it was kind of a weird thing, but a lot of times we had to get hit in the mouth to get us going,” Pearson said. “South played well that night and they hit us in the mouth.”

The Cavaliers had to rally often.  They won an incredible game at North Stanly on Sept. 3, a tussle in which freshman quarterback Jeremiah Alford and junior receiver Amari McArthur emerged as household names.

North had to get back on track after a disappointing 59-18 licking at Thomasville and had to regroup and do some soul-searching after things unraveled in a 60-0 loss at Salisbury.

But the Cavaliers never stayed down long. They always came back.

“We had a skeleton crew of coaches and were very short-handed, but the staff that we had did an incredible job,” Pearson said. “We were short on players, especially linemen. We used a 3-5 defense because we had more linebacker bodies than lineman bodies. We had to ask a lot of kids to play both ways, but our coaches got everyone the reps they needed on both sides of the ball.”

The most critical game for the Cavaliers, as the season progressed, was fighting to win 33-32 in overtime at underrated East Davidson, the week after the Thomasville disaster.

The Cavaliers also found a way to survive a second-round playoff game in overtime at Thomas Jefferson. They took that one even with McArthur shut down. That set up the long ride to Robbinsville, where they fought to the end on a cold night.

Pearson said the administration and the fans stayed the course. The Cavaliers always felt they had support.

“We had three very special kids on offense that we feel blessed to have (Alford, McArthur and sophomore running back Jae’mias Morrow), but we also had a lot of resilient kids who gave us everything they had,” Pearson said. “We had our tough tests along the way, but the kids made it a great season. We weren’t far away in 1A. One more stop at Robbinsville, and who knows?”

Rowan Coach of the Year