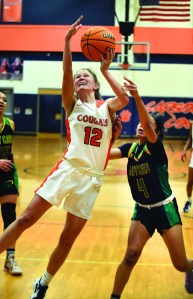 CHINA GROVE — Carson’s girls basketball team has been pretty terrific in a rebuilding season, but the Cougars took their lumps from another bunch of Cougars, the Charlotte Catholic version, on Wednesday.

A 60-32 loss to an undefeated 4A squad was a combination learning experience and wakeup call for Carson.

There’s a reason you play teams like Charlotte Catholic, ranked fourth in the state by MaxPreps. It’s the same reason Salisbury played third-ranked Apex Friendship in a tournament early this season. If you’re serious about doing anything in February, you need to find out where you are in December and what you need to work on.

Teams like Apex Friendship and Charlotte Catholic that boast national recruits and deep supporting casts can humble you.

But this early in the season being humbled isn’t such a bad thing. It’s not about going undefeated, it’s about being there at the end.

“We wanted to play better tonight and we definitely can play better than we did, but give all the credit for that to Charlotte Catholic,” Carson head coach Brooke Stouder said. “They’re really good. They’re big, they can shoot, and they can defend. Their defense made us very uncomfortable.”

Charlotte Catholic (10-0) brought a different kind of defensive pressure than what Carson has gotten used to seeing. It wasn’t frenzied fullcourt action, it was tight man-to-man in the halfcourt.

“They’re very disciplined defensively in addition to being tall,” Stouder said. “We turned it over way too much.”

The most acclaimed player for Charlotte Catholic is 6-foot-5 sophomore Blanca Thomas, who is rated as a top-10 player on the national scene. She got in foul trouble and wasn’t a huge factor, scoring six points.

Gracynn Gough, a 6-foot sophomore, did the most damage. She showed a lot of range and wrecked Carson with 19 points and 10 rebounds.

“We left their shooters open way too often,” Stouder said.

That spree was mostly Camden Corley, who had 10 points in the first half and finished with a career-best 13.

“She attacked the basket hard, made a really nice floater,” Stouder said. “Camden was aggressive tonight when her teammates were struggling to score. She’s capable of scoring like that.”

Catholic was able to limit Carson’s standard scorers. Catawba signee Mary Spry came in averaging 18.3 points and was held to nine. Hannah Isley, who was averaging 15.6, was held to six.

Carson’s usual third scorer, Aliayah White, has been in double figures four times and has been really hot lately, but didn’t score against Catholic.

Gough and McMenamin got rolling in the second quarter as the visitors took a 33-20 halftime lead.

Then Carson scored only three points in the third quarter as Catholic pulled away.

“Tough night, but it will help us in the long run,” Stouder said. “Now we’ll get some rest and work on some things to get ready for the Christmas tournament.”

Despite a loss to Salisbury (7-1), Carson would’ve been the No. 1 seed for the Dale’s Sporting Goods Christmas Classic at Catawba had it beaten Charlotte Catholic because 8-1 is better than 7-1.

But now the Cougars are 7-2 and are seeded second, while the Hornets, who earned it with a lot of wins against strong teams, are the top seed.

Carson has been solid. Third-seeded North Rowan’s only two losses were to Carson.

Carson and Salisbury were responsible for the two losses suffered by fourth-seeded West Rowan.

Carson will play seventh-seeded A.L. Brown (2-8) in Tuesday’s first round.