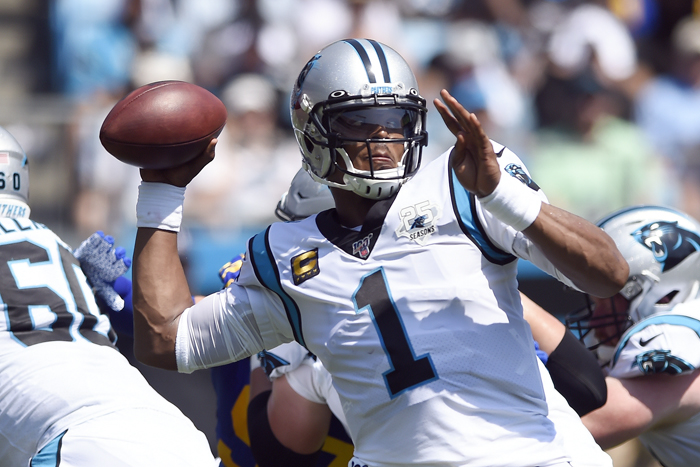 Carolina Panthers quarterback Cam Newton gets the nod as starter for Sunday against the Bucs. (AP File Photo/Mike McCarn)

CHARLOTTE — Carolina Panthers coach Matt Rhule said Cam Newton will start Sunday against the Tampa Bay Buccaneers and have a “major role” in the game, while Sam Darnold also is set to get playing time at quarterback.

Darnold was 4-5 as the team’s starter before being sidelined with a shoulder injury and placed on injured reserve Nov. 12.

The Panthers (5-9) signed Newton to replace him, unsure at that point if Darnold would be able to return this season.

The Panthers have lost their past four games with Newton as their starting quarterback, and the 2015 league MVP has lost his past 12 starts overall for Carolina going back to 2018. Newton’s most recent win as a starter for Carolina came Nov. 4, 2018, against the Buccaneers.

“My job is to do what is right for the team and the franchise and do what is best to win this game Sunday,” Rhule said. “When you are not winning you are trying different things to get yourself over the hump to win.”

The Panthers are playing a Buccaneers team that can wrap up the NFC South with a win on Sunday.

Rhule would not divulge how much he expects Darnold to play.

Two weeks ago, Newton shared some reps with backup P.J. Walker. It’s unclear if Walker will be active for Sunday’s game as Rhule rarely activates three QBs for a game.

Darnold was cleared medically for full contact in practice on Wednesday.

The Panthers are on the hook for $18 million for Darnold next season after picking up the fifth year on his rookie contract. Newton’s contract is up after the season and he will become an unrestricted free agent.

The move to play Darnold down the stretch could be an opportunity for the Panthers to determine whether he is worthy of a starting position next season — or if the team needs to invest in another quarterback.

“Sam was 4-5 as a starter and had some excellent moments early” in the season, Rhule said. “We all know he hit a little bit of a rut there, and now he’s had some time off. So when he has an opportunity to play we would love to see him show what he can do.”

Regardless of who plays at quarterback, the Panthers may not have their top wide receiver available. D.J. Moore did not practice on Wednesday because of a hamstring injury.

Hajrullahu next kicker; Gonzalez on IR

The Carolina Panthers have placed kicker Zane Gonzalez on injured reserve and signed Lirim Hajrullahu off Washington’s practice squad to replace him.

Hajrullahu is expected to kick on Sunday against Tampa Bay.

The Panthers also signed kicker Alex Kessman to the practice squad as a backup.

Gonzalez injured his quadriceps during warmups prior to Sunday’s 31-14 loss to the Buffalo Bills, leaving the Panthers without a kicker for the game. Gonzalez had made 17 straight field goals, solidifying what had been a shaky kicker position to start the season for Carolina.

Hajrullahu is a native of Kosovo.

The Panthers had previously signed the 31-year-old Hajrullahu to the practice squad last December, but he was waived six days later.