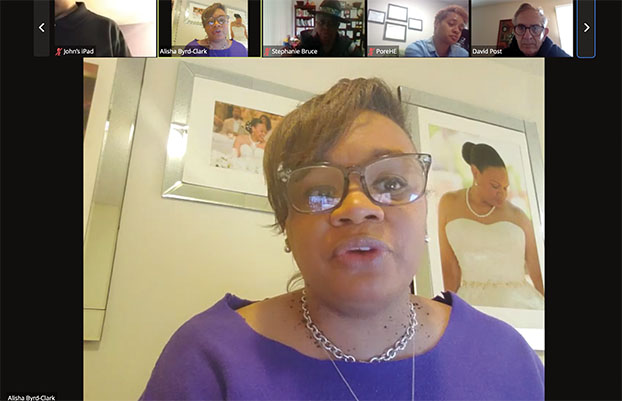 Alisha Byrd-Clark was one of three panelists who spoke to the Minority Business Council about ways the council and its members can help local nonprofits in 2022.

SALISBURY — At its final meeting of the year, the Rowan County Chamber of Commerce’s Minority Business Council convened virtually Tuesday to highlight local nonprofits and ways the business community can rally around them in 2022.

“There are so many worthy not-for-profit organizations, but we picked three we wanted to profile today,” Rowan Chamber President Elaine Spalding said. “We encourage people, if you can, to volunteer to help in whichever way might suit you.”

Gemstones & Compass Leadership Academy was founded in 2012 by Byrd-Clark and her late husband, Alex. The academy is located at 129a W. Corriher Ave. in Salisbury. After previously providing services for children in grades five through 12, Gemstones & Compass shifted its focus mainly to high school students last year. The academy offers mentoring and tutoring and offers its physical location as an internet cafe for those who don’t have access at home. The organization added a food and toiletries pantry in the past year as well.

“Giving back has always been close and dear to my heart,” Byrd-Clark said. “With the food and toiletries pantry, we’ve been able to service a lot of people in our community.”

Byrd-Clark said the academy gave out $13,500 in college scholarships to youth in the area over the past year.

The academy has also implemented the YES program, which stands for Young Entrepreneurs and Scholars and is aimed at teaching students entrepreneurial skills.

Byrd-Clark said the organization is appreciative of monetary donations, but added the giving of time is just as important. She encourages parents and other community members to volunteer at the academy, even if it’s a few hours a week.

More information can be found online at gemstonesandcompass.org.

Communities In Schools of Rowan County is an affiliate of a nationwide nonprofit focused on helping students stay in school and prepare for life. While the mission is straightforward, the services offered by the organization in Rowan County are far reaching.

“We provide students with everything they have to eliminate some of the barriers to staying in school,” Davis said.

Additionally, the organization provides tutoring, mentoring and school supplies. Communities In Schools also provides rental assistance and rehoming services to families to ensure that children have a stable home environment.

Davis said he is proud that Communities In Schools has worked with over 4,500 students and served over 8,000 families in Rowan County. The organization has eight schools under its services but plans on expanding to more schools in the future.

Davis said those interested in helping can donate their time to become a mentor for students.

More information can be found online at cisrowan.org.

Meals on Wheels Rowan is also an affiliate of a national organization. It delivers hot, nutritious meals to homebound seniors and people with disabilities throughout Rowan County.

Fink spoke about the nonprofit’s plan for the coming Christmas holiday. Meals on Wheels will be delivering winter totes with three shelf stable meals to tide people over and has also brought its users a breakfast bag.

Meals on Wheels is located at 1307 Salisbury Avenue in Spencer, but it relies on a number of volunteers to distribute meals throughout the county. Fink said the only requirements for a volunteer to deliver meals is that they be 18 or older, pass a background check and sign a confidentiality and conflict of interest agreement.

Like Byrd-Clark and Davis, Fink said her organization could use more helpers. Fink also encouraged those attending the meeting to spread the word about Meals on Wheels, both to help seniors and individuals with disabilities who could use the services and to recruit more volunteers.

After the panelists delivered speeches on each of their respective nonprofits, the meeting evolved into an impromptu brainstorming session, with meeting attendees offering ways to help the panelists. David Post, a Salisbury councilman and lawyer, offered to partner with Davis to help students learn mechanisms of the stock market by investing real money. Holly Pore, director of Career and Technical Education for Rowan-Salisbury Schools, offered to help both Byrd-Clark and Davis with summertime curriculum.