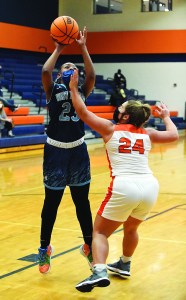 The Falcons were in a hurry and didn’t give Davie County any chance to settle in and get comfortable on Tuesday.

Emma Clarke had two buckets and Lauren Arnold and De’Mya Phifer had one each as the Falcons jumped on the War Eagles 8-0.

By halftime, West led 51-21 and there wasn’t any doubt about the outcome.

A running clock was triggered when West achieved a 42-point lead in the third quarter. The final was 84-31.

“We played well,” West head coach Ashley Poole said. “We had a chance to get everyone involved.”

Davie won against Central Davidson. Davie has taken a few blowout losses, but this was by far the most lopsided score.

The Falcons, mostly sophomores, are high-powered. They’ve won their last three since losing non-conference games to Salisbury and Carson.

De’Mya Phifer led the Falcons (5-2) with 23 points, all in the first three quarters, and has scored in the 20s three times this season. She averages 15.9 per game.

Lauren Arnold scored 16 and has been in double figures every game this season.

It was the most points scored by West’s girls since the 93-85 overtime win against Lake Norman early in the 2018-19 season. Abigail Wilson scored 39 that night.

West will play on Tuesday evening in the Christmas tournament.