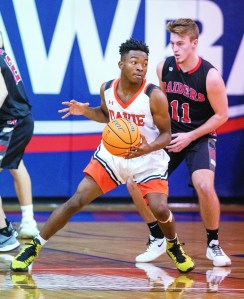 MOUNT ULLA — Davie guard Zaharee Maddox has been a handful for opponents all season.

The challenge for the War Eagles, who usually score in the 50s, has been to give Maddox some offensive help so he doesn’t have to try to do too much.

He got that assistance on Tuesday. Zymere Hudson scored 13 and 6-foot-5 freshman Jackson Powers scored 11.

Tuesday’s 20-point second half was one of the painful downs.

The first half couldn’t have been any more even. After a 14-14 first eight minutes, Davie (6-3) got two 3-pointers from Tate Carney in the second quarter and inched ahead 28-27 at halftime.

The third quarter proved decisive. Hudson scored eight in the period, as the War Eagles moved ahead 47-37.

When Maddox exploded for a couple of buckets early in the fourth quarter, Davie’s lead was 14, and West was in catch-up mode.

Athan Gill, playing in his second game, scored 14 to lead the Falcons. William Givens made three 3-pointers and scored 13.

The win should propel Davie into a No. 2 seed for the Christmas tournament.  It will be the first Christmas tourney for new Davie head coach Bruce Wallace.