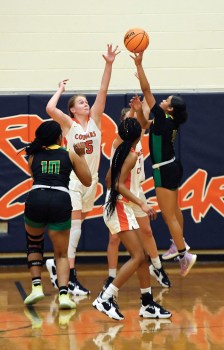 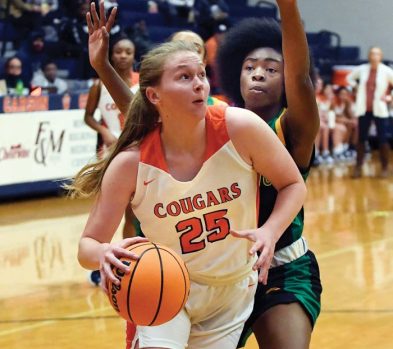 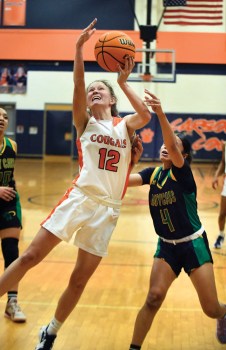 CHINA GROVE — Carson’s girls basketball held North Rowan to nine points in the first half and went on to beat the Cavaliers 67-46 on Tuesday.

Both of the losses for the Cavaliers (6-2) have been against Carson. The Cougars won 55-38 at North on opening night.

“We played very solid halfcourt defense in the first half,” Carson head coach Brooke Stouder said. “Solid man-to-man, stayed in front of them. North definitely can shoot, but most of their girls are even better on the drive. We played below the 3-point line and played them for the drive. North had seven offensive rebounds in the first half, but other than that, we couldn’t have defended much better.”

With the first half being played mostly in the halfcourt, Carson was able to take advantage of 6-footer Mary Spry’s height advantage. The Catawba signee scored 18 of her 21 points before halftime. She finished with 7-for-12 shooting and had 10 rebounds.

North regrouped at halftime and was able to generate offense with its defense in the second half. Carson made a lot of turnovers in the third quarter. North had a lot of steals and transition buckets.

Aliayah White has been shooting very well lately and had 13 of her career-best 15 points in the second half.

The loss locked North into the No. 3 seed for the Christmas tournament.

Carson and Salisbury are 7-1. Carson’s loss was to Salisbury.