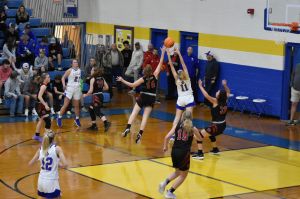 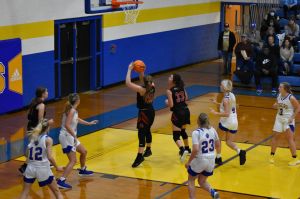 Mackenzie Chabala scores in the lane.

The Raiders did enough to get past Mount Pleasant 47-39 on Tuesday and they now own a modest two-game winning streak.

Bethany Rymer, who averages almost 17, scored a career-high 25 points. She made four free throws in the final 30 seconds as South (4-5) held off the Tigers’ last charge.

Mackenzie Chabala had 11 points, her fourth straight game in double figures, plus a bushel of rebounds. Madilyn Cherry scored seven, while Kynlee Dextraze had four.

Chabala’s aggressive work on the boards got South started. South held a 13-7 lead after a quarter.

The Raiders were cold in the second quarter, and the feisty Tigers (3-6) caught up. Rymer made a 3-pointer for the last points of the first half for a 23-20 lead.

South reestablished control in the third quarter with a couple of buckets by Cherry and an improved defensive effort.

A stickback by Dextraze gave South a 35-25 lead, and Rymer’s fastbreak layup put South ahead by a dozen after three quarters.

The Tigers still made it interesting, fighting back to within six at 43-37 before Rymer’s free throws put them away.

South is certain to be the No. 6 seed for the Christmas tournament.