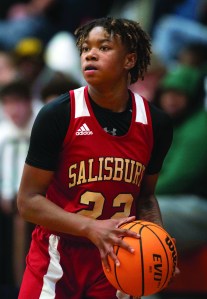 SALISBURY — Salisbury’s girls basketball team won’t lose often, but the Hornets had a great chance to drop one on Monday.

They won the hard way against Forest Hills — 57-46 — coming back after being down double digits.

There was a month’s worth of adversity in about 30 minutes. McCullough, who normally shoots the lights out, couldn’t buy one. Bryant, who normally has a sunny  disposition, got a frustration technical when she drew a whistle for what she was sure was a clean block. She had to sit out some anxious minutes with four fouls.

And no one was making free throws. The Hornets shot 25 of them and made 11. That’s an unacceptable 44 percent.

“There are plenty of teams that can beat us if we go 11-for-25 from the foul line,” Salisbury coach Lakai Brice said. “We work on free throws all the time, but we’ve got to find a way to do better.”

In addition to the foul-shooting woes, Forest Hills had an outstanding guard in Jamyah Blakeney. She put up 27 points to add to Salisbury’s issues.

The Hornets clanged shots and turned it over in the first half. They were fortunate to get to the break, down 23-19.

It got worse before it got better.  The Hornets slid behind by 11 in the middle of the third quarter before Jamecia Huntley got a critical bucket off a turnover.

That play started a decisive run by the Hornets, who started forcing turnovers instead of coughing them up.

After a Huntley block and two Icesis Nwafor free throws, the Hornets finally climbed all the way out of the hole and were level at 36-all.

The run continued with a Kiki Walker free throw and a MaKayla Noble bucket off an offensive board for a 39-36 lead by the end of the quarter.

Jaleiah Gibson and Mary Morgan had inside buckets as the Hornets inched ahead 46-43. When McCullough made her first 3-pointer of then night off a set play, the Hornets had a 49-43 lead.

Bryant took over from there, lobbing to Gibson for a bucket and driving for three layups, including two tough ones, as the Hornets pulled away.

Bryant scored 17, but it was a strange night with only one Hornet in double figures. Huntley scored eight. McCullough had seven.

“The games where you have to be tough help you a lot more in the long run than the easy ones,” Brice said. “We don’t like to be in that position, but we showed we could fight back.”

Salisbury, North Rowan and Carson all have one loss, so Christmas tournament seeds have yet to be determined. Salisbury has finished its pre-Christmas schedule. North Rowan plays at Carson Tuesday, which will help sort things out. Carson plays Charlotte Catholic on Wednesday.