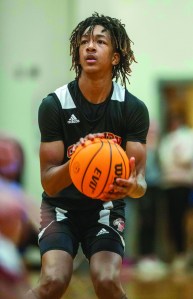 SALISBURY — Forest Hills has been bad news for Salisbury boys basketball and has provided a lifetime’s worth of disappointment during the last five seasons.

There was a season-opening overtime loss last season.

There was the 71-67 regional final loss in 2017-18 when the Hornets were step away from the 2A state championship game.

But there were no problems for the Hornets on Monday in the Salisbury gym. While they haven’t been able to win a close one against the Yellow Jackets, they didn’t let this one be close. Sophomore Jayden “Juke” Harris scored 28 points as Salisbury (4-3) briskly kicked the Yellow Jackets (3-6) to the curb, 76-52.

Forest Hills was was only able to stay in it for a quarter. Salisbury led 18-12 after one.

Separation arrived in the second quarter. Buckets by Harris and Cam Stout put the Hornets up double digits at 22-12.

Salisbury enjoyed a dominant second quarter (25 to 9) and sprinted to a 43-21 halftime lead.

When Mike Geter (13 points) made a 3-pointer early in the third quarter and Harris banged a pair of 3s from the same spot on the floor, it was 59-33, and time to start the bus for Union County.

Stout had 15 of his 17 points by halftime. Harris, who tallied a career high, scored 14 in each half.