OAKBORO — First of all, what were the East Rowan girls doing playing basketball at West Stanly, when the East Rowan boys were playing South Stanly at home?

So East’s girls needed a game, one last tuneup before the Christmas tournment. They found one.

It looked like a favorable matchup. West Stanly (1-7) has been struggling.

But East didn’t have leading scorer Hannah Waddell, who scored 30 on Friday. That made for a challenging Monday on the road.

The Mustangs won a squeaker. They put four in double figures and pulled it out 55-52 to end a two-game skid.

“We shot the 3-pointer well and we got scoring from a lot of different girls,” East head coach Bri Evans said. “Back and forth game and we were able to win it and even our record.”

The non-conference win will help East’s Christmas tournament seed. East (4-4) is sure to be No.5. 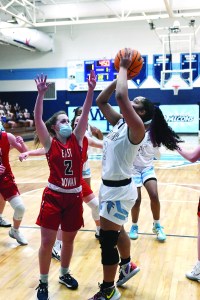