At Spencer Post Office, one woman is the town’s own Santa 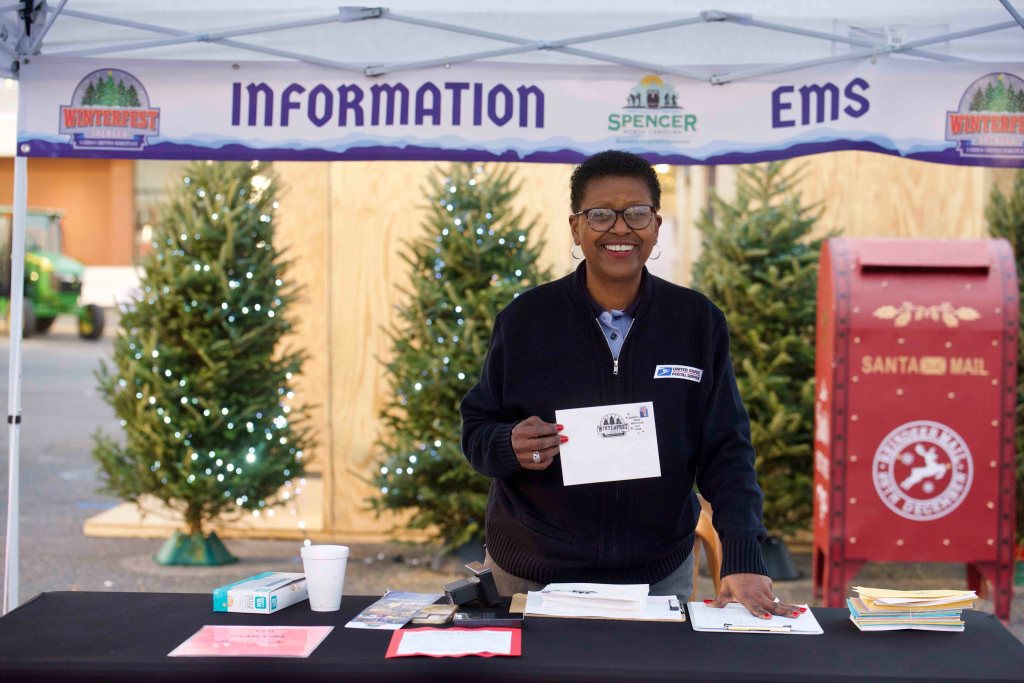 Carl Blankenship/Salisbury Post - Sheila Rollings holding an envelope with a special postmark for Spencer's Winterfest. Rollings was at the postal service's tent both weekends of the event.

SPENCER — There were two Santas at the town’s Winterfest this month.

One of the Santas was a jolly man in a red suit posing for photos with kids. The other was a woman who works for the U.S. Postal Service.

Sheila Rollings sat at the Postal Service’s tent during Spencer’s new holiday extravaganza this year. She greeted people, prepared letters with a pictorial postmark created just for the event and sat in front of a big red mailbox emblazoned with “Santa.”

Sheila is Santa at the Spencer post office. Whenever a local kid sends a letter addressed to Santa, it finds its way to her and she responds with a handwritten letter.

She has been a postal worker for “only” 16 years, but she didn’t start responding to letters until a few years ago. When Spencer carriers pick up letters addressed to Santa, they hand them off to Rollings. Letters have to find their way to the Spencer office and have a return address to get a response.

“It wasn’t anything planned or anything like that,” Sheila said.

One day, a carrier came in and handed off some letters to her. Then, her postmaster started giving her letters too.

She doesn’t know any of the families or children she responds to. She typically doesn’t get many letters, maybe a dozen or so, but she spends time responding to each one and she wishes she would get more. Rollings said she hopes Winterfest encourages more families to write their own letters.

The special postmark at the event got more interest than the Santa letters. The post office received multiple requests for envelopes bearing the stamp from out-of-state.

Rollings said she has never had a letter asking for anything outlandish. She usually talks to the kids about trying to get what they want and asks them if they have been good this year. She makes sure not to make any promises that would put parents in a bind.

Something that surprises her is how selfless some of the letters are. The kids ask for toys such as video game consoles, scooters and dolls, but they ask for gifts for their siblings and parents, too.

“One asked if I would bring their mom a cake,” Rollings said.

Rollings said the reason she responds to the letters is simple:

“Why do I do it? I love kids,” Rollings said. “Anybody who knows me will tell you: I just love kids, and if it’s something that simple that I can do to make a child’s day, that’s why I do it.”

She said the idea of a child writing a letter to Santa and getting no response is awful to her.

“It only takes a little bit of time, and that’s just what I do,” Rollings said. “It makes my day and it makes theirs’.”

Sometimes she gets replies from the parents thanking her.

The Postal Service also has a program that lets kid send letters to Santa and get a postmark from the North Pole, Alaska, office on the return, but parents have to send their own letter in the envelope to be returned.

The Postal Service’s history with letters to Santa dates back more than 100 years. Originally, all the letters to Santa were set aside, but post offices in 1912 were first authorized to open the letters and respond to them. Decades later, the program has expanded to include sending gifts to kids and has moved online. In 2021, more than 21,000 gifts were sent to kids.

A Postal Service spokesperson said in North Carolina more than 370 letters to Santa were received and “adopted” via Operation Santa.