Ask Us: What are details of Salisbury’s Christmas decoration installation? 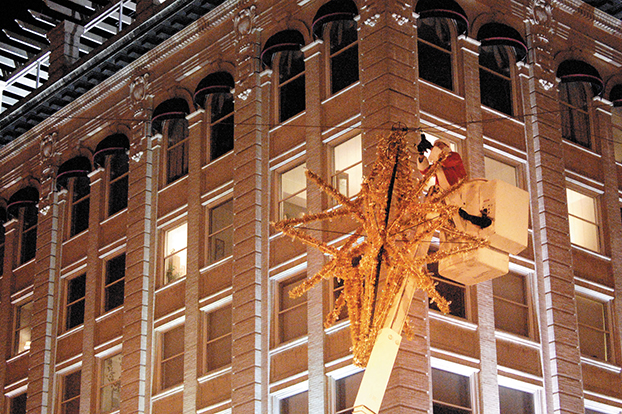 Santa, aka Randy Goodman, hangs the star in the Square in 2011. Photo by Andy Mooney.

SALISBURY — Putting up the city’s downtown Christmas decorations is no small task.

There are about 80 wreaths, 16 banners, two dozen crape myrtles wrapped in lights, enough strings of lights to create a bright downtown scene and one star carefully lifted above the center of the Square. The decorations go up roughly one week before the annual Christmas parade, the week of Thanksgiving, and come down in the new year.

This year, there was even a joint committee between the Salisbury Community Appearance Commission and Downtown Salisbury Inc. to discuss ways to improve the decorations.

For years, the city has relied June Goodman and Sons to handle the installation, removal and storage of downtown Christmas decorations. They are known to dress up in Christmas attire to put up the decorations, too.

The city sets aside $15,000 for installation, removal and storage, but this year it added $2,000 to add lights to the tops of the trees in the median on Innes Street. That was cut a number of years ago, but the joint committee this year requested they were added back, said Alyssa Nelson, the city’s urban design planner.

“Since this was our first time in the park there was a lot of modifications and moving around,” Powers said. “The process will be more streamlined next year and we’re already planning improvements with the BTG board and our Parks Department.”