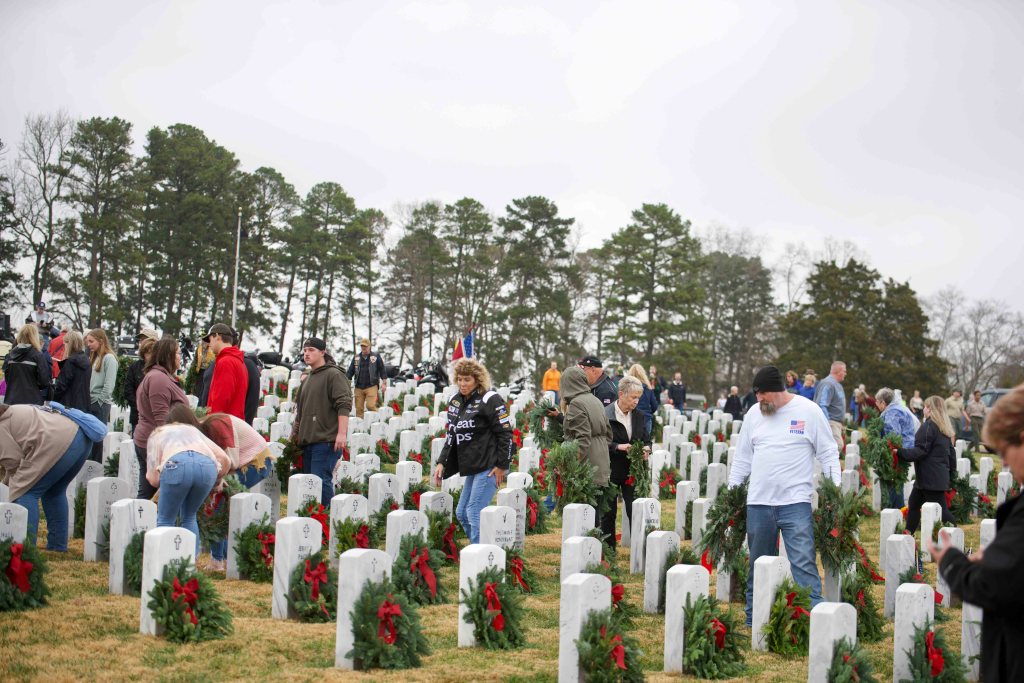 Carl Blankenship/Salisbury Post - Thousands of wreaths were placed on graves in minutes with the help of the crowd at the ceremony on Saturday.

SALISBURY — The nationwide laying of wreathes on the headstones of veterans’ graves returned on Saturday after a hiatus in 2020 due to COVID-19.

Locally, wreaths at the Salisbury National Cemetery and annex are the result of a national and local partnership. The wreaths are supplied by Wreaths Across America, a national organization, and Wreaths for Veterans, a Salisbury-based nonprofit.

In 2019, Wreaths for Veterans set out to collect enough wreaths to supplement what Wreaths Across America does and cover every headstone in the local cemeteries. The organization’s goal is to eventually ensure every National Cemetery in the state has a wreath for every marker.

Wreaths for Veterans organizer and founder Mike Satterfield, a Marine Corps veteran and local resident, said the local cemeteries historically have never been completely covered. The organization began collecting donations and made it happen with the support of Bottomley Evergreens and Farms in Sparta.

Satterfield’s inspiration came in 2018 — when he was visiting the Salisbury National Cemetery Annex to place a wreath. A girl at the cemetery asked him why her grandfather’s grave did not get a wreath. Satterfield gave the girl his wreath, and the encounter motivated him to get the organization rolling.

Two tractor-trailers filled with 11,990 wreaths made their way from Cleveland to Salisbury on Friday morning in preparation for the Saturday ceremony. Jody Pickett, another organizer, said any leftovers went to the veterans cemetery in Black Mountain.

On Saturday morning, the annex was flooded with vehicles along the paths through the cemetery and piles of wreaths ready to be placed at each headstone. The crowd was asked not to place wreaths at graves marked with the Star of David or the crescent and star out of respect for the faith of those veterans.

Keith Arbuckle, a Navy, Marine and Air Force veteran, former state captain of the Patriot Guard Riders and a field organizer, was emcee for a Saturday ceremony recognizing veterans and each branch of the armed forces, including the U.S. Space Force and the Merchant Marine.

Arbuckle unexpectedly was assigned as a Navy hospital corpsman when he enlisted. He described his work in a surgical intensive care unit at a naval hospital in Philadelphia and caring for injured young service members as one of the most rewarding things he has ever done.

“We need to honor these people,” Arbuckle said.

Arbuckle said he got involved in the wreath laying after being told about the ceremonies and researching the programs.

After the program, attendees took wreaths to each grave. The entire cemetery was covered in minutes.

Sylvia Coates was at the annex on Saturday to visit the grave of her husband, Mansfield, who died in 2020. Mansfield served in the Air Force in Korea as a cook. After he discharged, he started working for the Smithsonian, which he retired from in 1989.

Sylvia said she has visited his grave every two weeks since he died.