East Rowan's Leah Edwards will be among the girls wrestling in their own division for the first time. File photo by Wayne Hinshaw, for the Salisbury Post 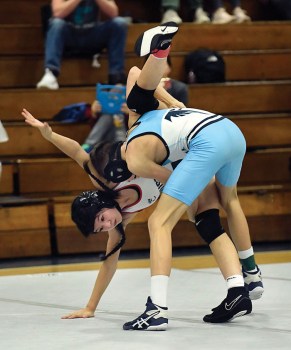 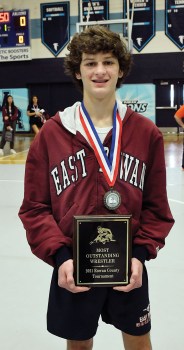 East Rowan's Luke Heglar was voted the Most Outstanding wrestler.; photo by Wayne Hinshaw; for the Salisbury Post 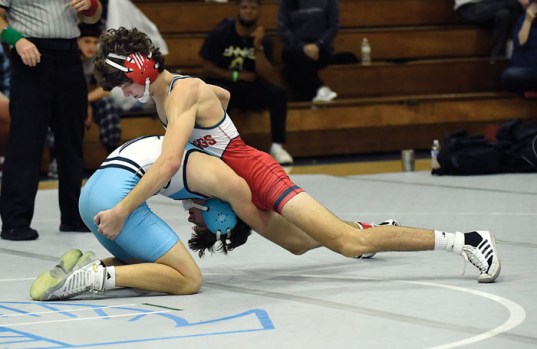 The host Falcons placed 13 wrestlers in the final round, claimed seven weight-class champions and totaled 220 points — emerging joyful and triumphant by a wide margin.

“It’s important because in the past, West hasn’t won a whole lot of tournaments,” eight-year coach John Brown said, moments after West outscored runners-up East Rowan (114), South Rowan (111.5), Carson (88) and Salisbury (69.5) to earn its sixth county title. “It’s still a big deal. We were really looking forward to today because there was no county championship last year — and we had a pretty good team that might have won it. They were excited about trying to win it four years in a row, but got crapped out of it because of COVID. That’s why they wanted to come back and get it this year, to win it for both teams.”

If it seemed like West was making up for lost time, well, it was. It mounted a 93-point advantage in the preliminary rounds and coasted through the finals, where five Falcons recorded pins. At 106 pounds, sophomore Mark Truman stopped East freshman Jasmyne Brown — the first of two history-making female wrestlers to reach the county finals — in 1:29. East teammate Leah Edwards dropped a 6-0 decision to South’s Mateo Diaz Ruiz in the 113 finale.

“Both of them were very competitive in the finals,” said West assistant coach John Bolmer. “They tested our kids. They’re both freshman, but they’re pioneers in Rowan County.”

Truman won convincingly, but not easily.

“I remember going out there being aggressive, looking for an open shot,” he explained. “It was hard to find, but I ended up finding it.”

Ruiz, a freshman who won a middle school county championship as a seventh-grader, stuck to his game-plan and won his 19th match in 23 decisions. “Just focused on one period at a time,” he said. “I felt like I stayed strong the whole time.”

West freshman Stetson Collins opened a 7-1, second-period lead against Carson’s Parker Mills at 120, then recorded a pin in 3:38. Junior teammate Bryan Taylor prevailed at 145, logging a much-needed victory over Carson’s Tristian Clawson in 2:36. And junior Adam Coughenour cleared the room at 160 when he pinned East’s Trevor Davis in an efficient 1:18.

“(Davis) was giving up his legs the whole time,” Coughenour noted. “Then the double-leg was there so I just took it. When I snapped him down his head was hanging a little bit. That’s when I saw an opportunity for a near-side cradle and finished him.”

West’s final pin came at 195 pounds, where sophomore Hunter Miller constructed a 12-1 lead before flattening Carson’s Ian Shue in 2:39. “That was a revenge match,” said Brown. “We’ve already wrestled Carson once and the Carson kid pinned him. He was beating Shue a week ago and Shue caught him in a headlock. He turned that around today.”

“I’m proud of our whole team,” said Coughenour, now 12-5 this season. “We definitely put the work in and came out and did our best. It’s something we’ll all have to look back on, not just winning but dominating.”

Added Truman: “There are a lot of good people on this team, people who are good at being technical and getting the job done.Yeah, it was expected, but not by that much. That’s the best part.”

The Most Outstanding Wrestler award went to 126-pound East senior Luke Heglar, who won by forfeit in the semifinals and pinned West freshman Kevin O’Brien in a grueling 3:59.

“That was definitely a surprise,” Heglar smiled afterward. “I’ve been wrestling since kindergarten and never won an MOW before today. What’s nice is I got to sit back and relax — until it was time to go. Then I was ready.”

Heglar led 4-1 after one period and was up 7-1 when he caught O’Brien (now 16-2) late in the second. “(O’Brien) is a really good wrestler for a freshman,” he said. “But I defended his shot one time, then inside-tripped him. I pinned him with an arm-bar with short time on the clock. I think at that point, I just wanted to be done with the match so I finished strong.”

East — coached by the twice-retired Barry Justus — had another champion at 152, where Shawn Guimond pinned West’s Lee Vaughters in 2:44.

South senior Jacob Cox ran the table at 138 pounds. The two-time state champion — a 5-carat diamond in a field of cubic zirconia — pinned East’s Malachi Pope in the semis (4:55), then manhandled West’s Connor Misenheimer for the crown (26-9 tech fall).

“I focused on hand-fighting and keeping may pace up,” Cox said. “It helps to have confidence in yourself.”

Cox, who owns a 4.56 grade-point-average, is unbeaten in 18 matches this season and 122-4 as a varsity wrestler. He hopes to pursue a mechanical engineering degree at N.C. State, but not until he goes after a 3A state championship in February. If successful, he’d be Rowan’s first three-time state titlist.

“I practice with lots of kids from 3A and 4A schools,” he offered. “The schools are larger, the competition may be harder, but there’s really no big difference when it comes to wrestling.”

In addition to Ruiz and Cox, senior teammate Mason Kincaid won the county 170 championship. He pinned East’s Noah Breen in the semifinals and won by tech fall (22-5) over West’s Braxton Barger in the final. The Raiders brought only seven wrestlers to the tournament and six of them placed.

Salisbury’s Nisaiah Childers had the quickest pin of the finals, stopping West senior C.J. Harrell in 1:15. Teammate Reed Fugle won by tech fall (16-0) over West’s Greyson Burleson in the 220 final. … Carson, now five years removed from its last county championship, placed four wrestlers in the finals — Mills, Kluttz, Clawson and  Shue. Each was defeated. … North Rowan, county champion from 2011-13, is not fielding a team this season.