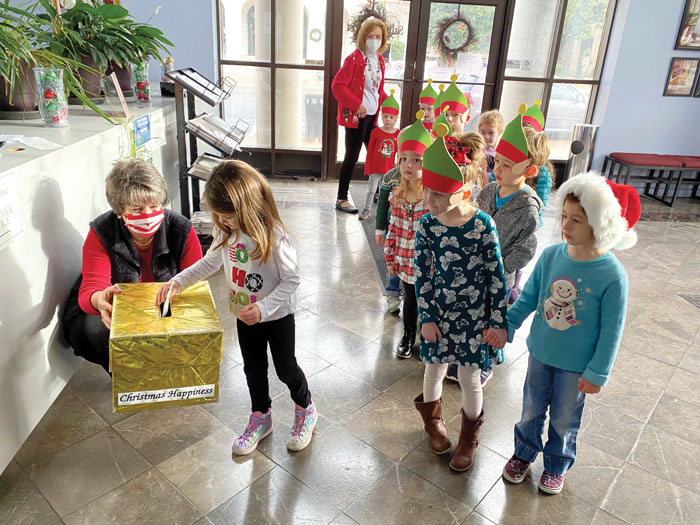 Preschoolers from First United Methodist Church drop off their donations for Christmas Happiness at the Salisbury Post on Friday. Photo by Janice Swink, Salisbury Post.

SALISBURY — Some things are certain about the holidays in Salisbury.

Crews lift a star over the middle of the Square, crowds line the street to watch the city’s annual Christmas parade, a cadre of singers serenade attendees of First Baptist Church’s living Christmas tree, Salisbury Police partner with Gerry Wood Auto Group to give bikes to children and preschoolers at First United Methodist Church make the short trip to the Salisbury Post to deliver their Christmas Happiness Fund donation.

Kelly Austin, the preschool director, said the children brought in change this month and last. Sometimes, the donation is boosted by an adult donation, but this year’s sum was almost entirely comprised of loose change, Austin said.

Austin says fundraising is accompanied by a lesson that starts before Thanksgiving about being thankful and about needs versus wants. Throughout November and December, change is collected in plastic cheeseball containers decorated with fall leaves, she said.

• In memory of Ruth and Carl Agner, Kathleen and Pat Broadway and Charles Agner, by Patrick and Linda Broadway, $200

• In honor of Rowan County Children by the First United Methodist Church Preschool, $285.47

• In memory of my husband Robert Cobb and my mother Alda Davies by Sandra Cobb, $200

• In honor of my wife’s wonderful doctors, nurses and staff over the last year, by Dana and Jan Samuelson, $25

• In honor of my brother whom I’ve never met, Gary Stephen Chapman, by Elaine Chapman Howle, $100

• In memory of Tiger, Squirt, Fluffy, Gizmo, Stinker, Wesley, Chloe and Brownie and in honor of Tricia on her birthday by Benny, Harry and John. $100

• In honor of Tuesday’s Lunch Bunch by Helen Safrit, $100

• In loving memory of J.P. and Sally Helms and Libby Hoffmire by Anne, $50

• In memory of my wife Anne Loeblein by Bob Loeblein, $100

• In honor of St. Luke’s Episcopal Church clergy, staff and choirs by Pennie and Dick Martin, $100

• In memory of Jimmy Hurley, by Hen and Joan Henderlite, $100

• In memory of our beloved son Chris Pinkston by Gary and Betty Pinkston, $100

• In memory of our parents, B.F. and Edna Pinkston and Clarence and Janie Wise by Gary and Betty Pinkston, $400

• In memory of Hoytt and Anne Heilig, Mildred and Roy Arthurs and Jean A. Luther, by Phyllis and Donald Heilig, $100

• In loving memory of Myrtice and Dimp Roberts, by Ginny Parnell Mabey and Andy Parnell, $150

• In memory of Butler and Dorothy Weddington, and In honor of John, Jane and Gail by Sue, $100

• In loving memory of a special loving daughter Dawn Petrea, by Larry and Barbara Gentle, $100