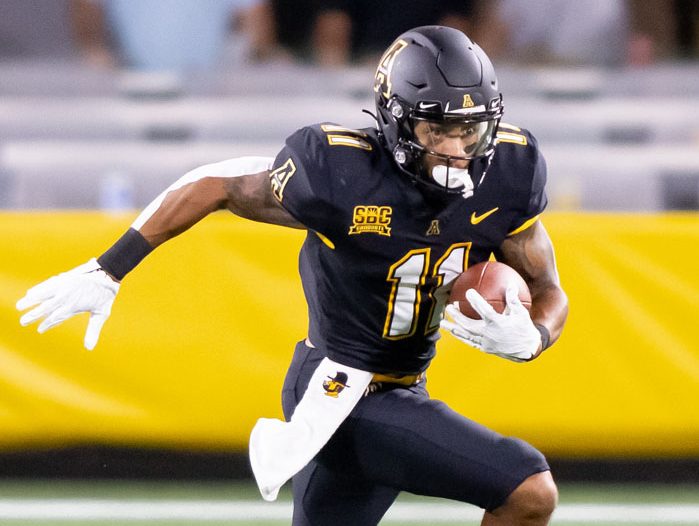 Zappe broke a pair of single-season FBS records by passing for 422 yards and six touchdowns, and Western Kentucky handed Appalachian State its first-ever bowl loss by beating the Mountaineers 59-38 in the Boca Raton Bowl on Saturday.

Zappe finished the season with 5,967 yards and 62 touchdowns for the Hilltoppers (9-5). He topped the previous FBS marks of 5,833 yards set by Texas Tech’s B.J. Symons in 2003 and 60 touchdowns set by LSU’s Joe Burrow in the Tigers’ run to the national championship in the 2019 season.

“In my opinion Bailey Zappe is the best quarterback in college football, and now he gets to say he is one of the best,” Western Kentucky coach Tyson Helton said. “He’ll go down in history as being one of the best, and holds two records. It’s just special to be a part of that.”

Jerreth Sterns caught 13 passes for 184 yards and three touchdowns for Western Kentucky, finishing his season with 150 catches for 1,902 yards. Mitchell Tinsley had two TD catches for the Hilltoppers and Noah Whittington needed only seven carries to rush for 150 yards, 86 of those on a third-quarter scoring run.

It has been an emotional time for Western Kentucky, which played with those affected by the unspeakable damage caused by what state officials have called the most destructive tornado event in Kentucky’s history. Tornadoes across the region last weekend — including in Bowling Green, where Western Kentucky’s campus sits — have been blamed for 78 deaths in Kentucky alone.

“I hope today that everyone back home was watching and they felt just positive about everything and they kind of just forgot about the tornadoes for a temporary moment,” Sterns said. “I’m glad we got to do that for them today.”

Chase Brice passed for 317 yards and four touchdowns for Appalachian State (10-4) before leaving in the fourth quarter with a right leg injury. It was the first loss in seven all-time bowl games for the Mountaineers.

It was 24-24 late in the opening half, when Zappe — who completed 33 of 47 passes — put his name in the record book and put the Hilltoppers ahead for good. Appalachian State was outgained only slightly, 637-609, but turned the ball over four times.

“I think it all came down to us having those turnovers,” Appalachian State safety Jalen Virgil said.

Zappe broke the yardage mark on a 43-yard pass to Sterns — who finished the season with the fifth-most receiving yards in FBS history — late in the half, then tied the touchdown mark on the same drive when he connected with Sterns for a 10-yard score. That started what became a 35-7 run by the Hilltoppers.

“He’s a hell of a football player,” Clark said of Zappe. “Had a chance to be around him this week. He’s an outstanding young man.”

Zappe threw his record-setting touchdown pass on a 2-yard slant to Tinsley on the Hilltoppers’ second drive of the third quarter, pushing WKU’s lead to three touchdowns.

“It’s been the best year of my life,” Zappe said.

The 97 combined points were a record for the Boca Raton Bowl, topping the 82 that Western Kentucky and Memphis combined for in the Hilltoppers’ 51-31 win in 2016. The 59 points by Western Kentucky were also a record, surpassing the previous mark of 52 set by Marshall in 2014 and matched by Florida Atlantic — on its home field — in 2019.

Appalachian State was receiving votes in the most recent AP Top 25 poll, though whatever slim chance the Mountaineers had of making the season-ending poll next month is now nonexistent.

Appalachian State: The Mountaineers are scheduled to open their 2022 schedule on Sept. 3 at North Carolina.

Western Kentucky: The 2022 season is set to begin on Aug. 27 at home against Austin Peay.