Reenacting domestic arts in the Hall House kitchen for Christmas 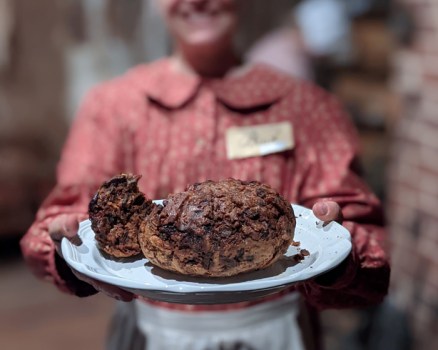 Susie Worcester prepared figgy pudding a few days before the Hall House Christmas event. She boiled the prepared mixture for five hours in a buttered cloth, froze the pudding and thawed it for the Dec. 4 event. Submitted photo 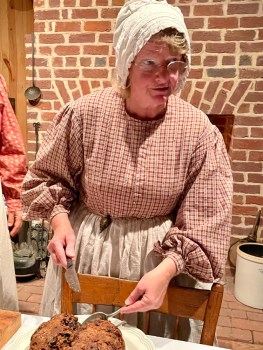 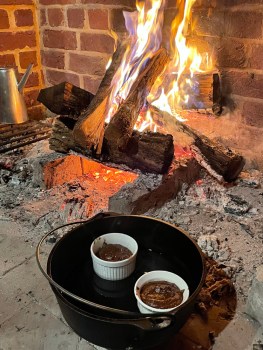 Pots de crème in ramekins for serving guests during Hall House Christmas on Dec. 4. The traditional French pudding was prepared over coals from the kitchen fire. Submitted photo 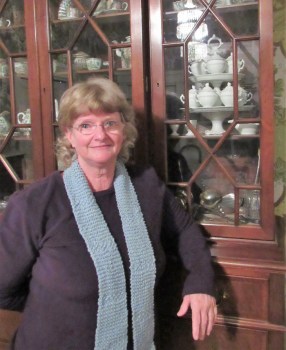 Susie Worcester, a docent at the Hall House, stands next to the white porcelain pots de crème set owned by Dr. and Mrs. Josephus Hall. Dr. Hall (1805-1873) and his second wife, Mary Cowan Hall (1823-1902), lived in the mansion during the late Victorian era. Submitted photo 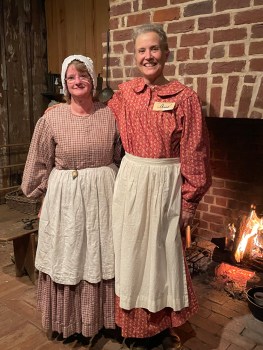 Susie Worcester and Barb Bray, both members of the Southeastern Civilian Living Historians, stand in the detached kitchen at Hall House. Worcester is also a docent at Hall House. Submitted photo

SALISBURY — For Christmas at Hall House on Dec. 4, Historic Salisbury Foundation staged a historical reenactment without soldiers, rifles or canteens. This reenactment took place in a setting more appropriate to the season: the detached kitchen at the 1820 mansion.

For the reenactment, Worcester, who doubles as a docent at Hall House, was dressed in a simple long 19th century-style cotton dress with an apron and bonnet. Her tools were equally simple:  cast iron skillets, redware bowls, tin pans, twig whisks, flour, eggs, brandy, brown sugar and hot coals on the hearth.

Nineteenth century cooks relied on receipts — the ancient term for recipe. In the four years Worcester has studied and practiced traditional kitchen arts, she has discovered that old receipts have a lot to teach us about life 200 years ago.

Old receipts were usually nothing more than lists of ingredients and quantities. The lack of detail was for good reason, said Worcester. If an experienced cook were making a sponge cake, for example, all she needed to know was how many eggs and how much sugar and flour to use. The receipt did not need to explain about blending the ingredients, baking the cake, the time involved, the container or the temperature. Those details were common knowledge learned from parents and grandparents. To tell if the cake was done, “You go by the smell, how it looks and what it sounds like,” she said.

One particularly common receipt omission concerned how long eggs were to be beaten. Experienced cooks going back as far as the Puritans knew that whisking by hand was to continue for at least 15 and for some receipts, 30 minutes. “You get a totally different and better consistency that way,” said Worcester.

For the December 4 Hall House event, Worcester and Bray planned two desserts. The first, pots de crème (pronounced po duh krehm) is a traditional French dessert that the Halls probably made. Inside a China cabinet in the Hall’s dining room is a set of pots de crème lidded cups. Docents like Anne Lyles always point out the white porcelain set that came with the house when Historic Salisbury Foundation purchased it in 1972. Worcester would not think about using the Hall House antiques for her reenactment. She found an old set on eBay. “Pots de crème is essentially a chocolate pudding,” she said.

For her second dessert, the pair chose figgy pudding, a treat mentioned in Dickens’ “A Christmas Carol” and the song, “We Wish You a Merry Christmas.” For Hall House Christmas, Worcester prepared a boiled pudding at home with dried figs, her own dried grapes, day-old bread, eggs and spices. The mixture was wrapped in a cloth that was coated with butter, placed in boiling water for five hours, frozen and thawed for the event. “The pudding gets its sweetness from a sauce made with butter, brown sugar, brandy and lemon,” she said. The second figgy pudding, a quicker steamed version, was prepared Dec. 4.

Unlike cooks of old, Worcester did not learn traditional cooking from her elders. After retiring from the Union County Library in 2012 and working on various projects, she got bored. A few months after touring Latta Plantation in Charlotte, she volunteered as a docent. On one particularly cold night in late 2017, she wandered into the plantation kitchen to keep warm. There she watched as volunteers prepared a simple dinner. “I loved what they were doing,” she said. She found a new passion. Four years later, she has a far-too-big collection of cast iron cookware and redware bowls.

Seeking the camaraderie of other domestic reenactors, she joined the Southeastern Civilian Living Historians, a nonprofit organization formed during the pandemic. Membership is open to those practicing a wide variety of ancient arts — weavers, potters, bakers, basket makers, hand sewing artists, knitters, spinners, leather crafters, textile workers, candlemakers, herbalists, brewers, furniture makers and more. Barb Bray and several other members of SCLH were on hand Dec. 4 to demonstrate tatting, crocheting and the history of Santa Claus, as well as preparing Christmas desserts.

For those wanting an introduction to ancient domestic arts, Worcester recommends “The Art of Cookery Made Plain and Easy” published in 1747 by Hannah Glasse and “The Backcountry Housewife” by Kay Moss. Both are available on Amazon. She also recommends “Mary Cowan’s Cookbook” published by Historic Salisbury Foundation.

First timers need to keep the old mantra to “keep it simple” in mind, said Worcester. “Most old receipts are the same as we use today, but with fewer ingredients.”