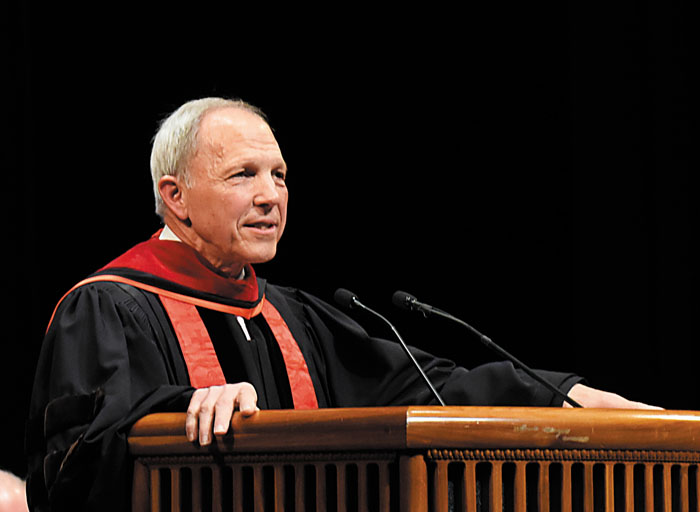 SALISBURY – For alumni, students and employees at Catawba College, Kenneth Clapp is a friendly face on campus, always available to listen and be there for them.

He has been with Catawba for as long as most people remember. This summer, he will retire after 33 years at the college.

“Ken has spent decades serving our campus community with wisdom, compassion, and kindness,” Catawba President David Nelson said. “Catawba is a better place due to the imprint he has left on us. He will be greatly missed.”

Employed at Catawba since 1989, Clapp has served in several key roles. First as college chaplain and assistant professor of religion, then later as chaplain and vice president for student and religious life, responsible for all student services as well as teaching and the chaplaincy and two terms as interim dean of students.

He then became chaplain and senior vice president and added to those duties were facilities, dining services, conferences and transportation. Clapp also served as interim president from April 2020 until July 2020, assisting with the transition from Brien Lewis to Nelson. In addition to his current roles as chaplain and senior vice president, Clapp serves as director of Catawba’s Lilly Center for Vocation and Values.

“Ten years ago people started asking me when I was going to retire,” Clapp said. “Those questions were a bit disconcerting given I wondered if they were hinting that I needed to ‘get out of the way.’ However, in trying to get students to think about their vocational calling, I have used the quote attributed to Mark Twain suggesting if one chooses the right work, one will never work another day because one will enjoy the work so much it will not seem like work.”

After graduating from Catawba, he went on to Yale Divinity School and Lancaster Theological Seminary and was ordained as a minister in the United Church of Christ. His vocational calling led him first to serve as minister of education at North Haven Congregational United Church of Christ in North Haven, Connecticut, pastor of Emanuel UCC in Lincolnton and then on to the UCC’s Blowing Rock Assembly Grounds, where he served as executive director of this facility before joining Catawba.

When he returned to Catawba as an employee, he was following in the footsteps of his great-great-great grand uncle’s footsteps by taking a leadership role at Catawba; his family patriarch, Jacob C. Clapp, served as president of Old Catawba in Newton from 1861 until 1900.

He has been and continues to be supportive of his alma mater. He has served on the Catawba Alumni Association and chaired the Class of 1970’s effort as it raised a $50,000 Challenge Gift in 1990.

He has established a scholarship at Catawba in honor of his parents, the late Ernest and Lillian Clapp, who always encouraged his faith journey and his pursuit of education. For decades, he has been a fixture on the sideline at home football games, cheering on his beloved students and serving as a visible reminder of his support and faith in them.

As chaplain, Clapp has made a significant and lasting impact on the lives of hundreds of students as he has guided and encouraged them in their journey to strengthen their faith. He has served as a mentor and adviser to many students and has established friendships with many that have lasted for years.

Clapp’s weekly chapel services provided an opportunity for individuals to reflect on their spiritual life and gain comfort and inspiration for the week, but it possibly has been through the more than 200 retreats he has planned and led both for current students and alumni that he has had the greatest impact.

For many, he was one of the first persons encountered at Catawba, and his “make a difference” and “get to know yourself” challenges on freshmen retreats were words that would reverberate throughout their college careers.

He also has officiated the weddings of hundreds of students and assisted with the annual Lessons and Carols Christmas program. His service does not end at Catawba College, however, he has chaired the First United Church of Christ Foundation, served on the advisory board of Piedmont Crossing Retirement Community and the Boy Scouts of America Eagle Scout Board of Review, is an advisor to Catawba’s Dead Athenian Society, the Philomathean Society, and Catawba Student Government Association.

He has been honored by Catawba with the Trustee Award, the Algernon Sydney Sullivan Award, O.B. Michael Award, Phi Epsilon Award, Trustee Award, Alpha Chi Award and the Professor of the Year Award on four different occasions. In 2000, members of Catawba’s senior class created an award named in his honor, The Kenneth Clapp Tri Delta Award. That award is given annually to a faculty or staff member who exemplifies his qualities of dedication, devotion and dependability. The United Church of Christ has honored him with its National Excellence in Teaching Award.

“Although often exhausting and frustrating and always challenging and demanding, ‘working’ with Catawba students has been truly enjoyable, gratifying, enlightening, invigorating and joyful,” added Clapp. “So, why retire?  As the writer of Ecclesiastes reminds us, ‘there is a time and place for everything.’  Prior to being asked to served as interim president in 2020, I had planned to retire in 2020.  Although I will miss being actively involved in what I believe will be the most exciting, enjoyable and beneficial chapter in Catawba’s history, this is the time.”

When asked what he will do with all his free time, Clapp responded he is looking forward to “spending more time on the farm, at my cabin and finishing writing the two books I have been working on.”