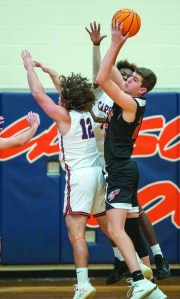 Harris, a long, rangy guard with a big future, will score a lot of 27s in his career, so more of the postgame buzz was about big guy Nick Antosek.

Antosek has been scoring about 2 points per game, but on this night he had 18. That was noteworthy. He’s 6-foot-6 or so, and the Hornets can really use his height. He won’t score 18 every night, but if he can get 10 points with a handful of rebounds and blocks, he’s a difference-maker.

Friday was a confidence-builder for him.

Antosek didn’t have to do anything amazing. All he had to do was catch the ball and lay it in off the glass, but he showed good hands and his teammates were making a conscious effort to look for him. Harris and Deuce Walker, who had an exceptional game as a distributor, got him a lot of routine layups, and to Antosek’s credit, he consistently put the ball in the hole.

Salisbury (3-3, 1-0) was returning to action after a tough opening stretch that included losses to Uwharrie Charter, Northwest Guilford and West Rowan.

“We played five games in first eight days, and that’s mentally exhausting,” head coach Bryan Withers said. “When you’re playing that much at the start of the season, you’re just using concepts and not really running any plays. But we’ve had some time in the gym together now, some solid practice time, and I could see tonight how much it helped. We’re starting to get it. We can still share the ball better, but we made a lot of progress in that area tonight.”

Salisbury started briskly and took a 23-12 lead when Harris passed to Antosek for a layup to close the scoring in the first quarter.

Harris and Cameron Stout made 3-pointers early in the second quarter, but South Davidson stayed in the game well into the quarter. Hayden Smith banked a long 3-pointer for the Wildcats  to cut Salisbury’s lead to 33-25. South Davidson (4-3, 0-1) actually got within 34-27 with 2:25 left before halftime.

That’s when Mike Geter hit a 3-pointer from the left corner for the Hornets that turned out to be the key shot of the game. It started a blistering 15-0 run by the Hornets to close the half. South Davidson was tiring by then and was in some serious foul trouble, and things snowballed quickly. After some flurries on the boards, the Hornets owned a 49-27 halftime lead.

“There were times we didn’t play very well tonight,” Withers said. “But there were other times we showed a lot of improvement. We were better on defense tonight. We’ve had to make big adjustments on defense. For years, we’ve had a great rim protector (Jalon Walker), so we were able to gamble and go after steals. Now we’ve got to be more solid. We’ve got to keep our man in front of us and not gamble so much.”

Cameron Stout made a steal and assisted on a Harris bucket to start the second half. The Salisbury stampede continued from there. When Walker drove to score at the close of the third quarter, it was 75-39.

When Salisbury achieved a 42-point lead, a running clock was triggered. That’s the only thing that kept the Hornets short of hitting 100. They were coming at the Wildcats in waves with a deep bench.

Besides the big games from Harris and Antosek, the Hornets got 15 from Stout, 12 from Geter and eight from Dashawn Brown.

Salisbury limited South Davidson to 29-percent shooting and forced 17 turnovers. Wildcats other than Smith were 2-for-15 on 3-pointers.

“We got better and we’ll keep getting better,” Withers said.