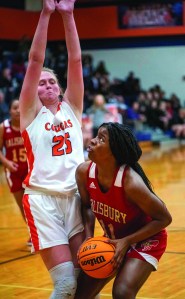 SALISBURY — South Davidson brought girls who could shoot to the Salisbury gym on Friday.

Had it been a stationary free-throw shooting contest or a 3-point shooting matchup, the Wildcats, who arrived in town undefeated, might have won it.

Instead it was a game in which Salisbury challenged every pass and every dribble and every inch of hardwood with relentless, terrible pressure. Traps forced desperate passes and those passes were immediately intercepted and converted into layups. If the first Salisbury layup attempt missed, the second one or the third one went in.

It was a furiously paced contest of motion and movement and mayhem, and South Davidson’s shooters rarely got their feet set.

Imagine obeying the speed limit and trying to drive 35 miles per hour, but someone is on your bumper pushing you at 70. That’s how it was for South Davidson. It’s an uncomfortable situation being forced to go twice as fast as you want to.

The Wildcats (5-1, 0-1) didn’t quit, but their first loss of the season wasn’t just a loss, it was a Central Carolina Conference crushing. When a merciful running clock ticked to zeroes, the final was Salisbury 80, South Davidson 20.

Salisbury dressed 10 and all 10 have a reasonable chance to score, so there’s not a lot of mercy being offered no matter who’s in there. Shot-blocker Haley Dalton, finally back from a concussion, was part of the mix of 10 on Friday.

It was 31-0  — yes, 31-0 — nearly two minutes into the second quarter when Hannah Harrison, a guard who has been averaging about 20 points per game, made a 3-pointer for the visitors.

That shot brought applause and relief.

The running clock that arrives when there’s a 42-point lead in the second half was triggered when the Hornets went on top 58-15 in the third quarter.

MaKayla Noble probably had the best game for the Hornets.  Tall, strong and active, the sophomore made alert passes and scored 12. Kyla Bryant led the scoring with 16, a lot of it on transition finishes. McCullough cooled off in the second half and settled for 12. Jamecia Huntley was a key to the defensive pressure and scored 10.

Jaleiah Gibson powered in eight and worked just as hard up 40 as she did in the opening minutes. Kiki Walker, a long transfer guard, accounted for the last five points with a 3-pointer and a nice pass.

The Hornets can shoot it better, but as far as playing hard and sharing the ball, Salisbury looked like a team worthy of its high MaxPreps ranking — 23rd in the state and second in 2A.

Salisbury is home against  Forest Hills (5-2) on Monday.