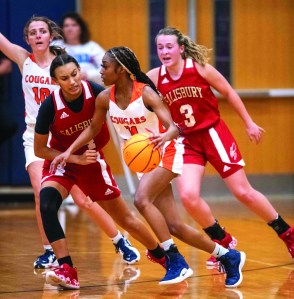 Carson’s Aliayah White (11) looks for an opening in  a previous game this season against Salisbury’s Kiki Walker (4) and Rachel McCullough (3). JON C LAKEY/FOR THE SALISBURY POST.

CHINA GROVE — Carson’s girls basketball team made it five wins in a row on Friday.

The Cougars stayed unbeaten in the South Piedmont Conference with a 54-17 running-clock romp against Concord.

Hannah Isley scored 13 for the Cougars (6-1, 3-0), while Aliayah White matched her career best with 12 and Makayla Johnson scored a dozen for the first time.

Johnson had 10 of her 12 points in the first half as the Cougars established  a secure 38-11 lead.

“It was good to see her get going,” Carson head coach Brooke Stouder said. “We had a really slow start, but we finally got going the last few minutes of the first quarter. Aliayah shot the ball very well.”

Things will be a lot more challenging for Carson next week, as a surging North Rowan team visits on Tuesday and  Charlotte Catholic, the state’s third-ranked squad, comes to China Grove on Wednesday.