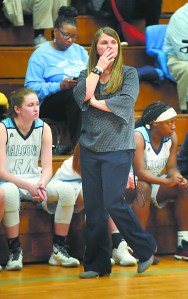 MOUNT ULLA — Northwest Cabarrus came in with an undefeated record and strong rankings (30th overall in the state and sixth in 3A by MaxPreps), but West Rowan’s girls were ready for this one.

West had come up short in previous big games against Salisbury and Carson, but the Falcons handled the Trojans on Friday, 56-44.

It was a win that kept West a game behind Carson and in contention in the South Piedmont Conference.

“We got the quick start we wanted and we had a lot of intensity on defense,” West head coach Ashley Poole said.

Emma Clarke had six points in the first quarter, while Lauren Arnold had five, as the Falcons jumped out to a 17-8 lead.

It was basically even the rest of the way, but that fast start made the difference for the Falcons (4-2, 2-1).

Makaylah Tenor and De’Mya Phifer made 3-pointers in the second quarter to help West take a 34-24 halftime lead.

West struggled some offensively in the third quarter, but the defense held up and made it hard for Northwest (6-1, 2-1) to gain any ground.

The Falcons made nine free throws in the fourth quarter, with Tenor going 3-for-3 at the line and Arnold 4-for-6.

Phifer led West with 16 points. Arnold had 13, with Tenor adding 12 and Clarke 10. All four are sophomores.

Arnold has scored in double figures in every game.

West slowed down Chaunesse Barringer (nine points) and Leah Zsambeky (six), who have been scoring a lot for the Trojans.