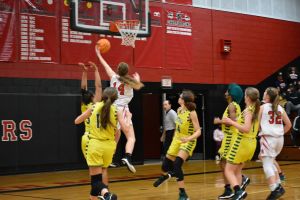 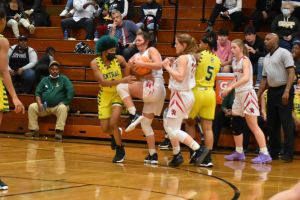 It was an important win for South’s program. Central is solid, respected, athletic, regarded as a contender for conference honors. For South to beat Central in a tight, tense SPC game is a major step forward.

Of the nine career wins for patient young coach Alex Allen, who is in her third season, this had to be the best and most satisfying so far.  It probably was the best victory for South’s program since the night in the 2018-19 season when senior Janiya Downs refused to let the Raiders lose to Thomasville. Downs scored 36 in a 56-53 victory.

South had lost four in a row (all against winning teams) prior to Friday, so the Raiders aren’t where they want to be yet.  They haven’t turned the corner, but at least they can see the corner.

South has boosted its offense tremendously with the return of  Rymer (15.9 points per game) to the hardwood for her senior season and the addition of tough freshman Kynlee Dextraze inside.

The biggest issue has been turnovers which have led to easy transition points for faster opponents. West Rowan scored 70 on the Raiders and Northwest Cabarrus put up 86.

“We didn’t freak out when they pressed,” Allen said. “We were actually pretty calm and collected. That’s absolutely a big step for us.”

Sometimes Rymer is a 3-point shooter, but on this night she was a driver and scored 21. Mackenzie Chabala had 14. Madilyn Cherry scored 11, while Dextraze had eight. Eden Childers scored four, and the Raiders don’t win without those four.

Amari Haley, a 6-foot senior, scored 17 for the Vikings. Kyra Lewis and Mariah Barrie, a senior guard headed to Barton, had 14 each.