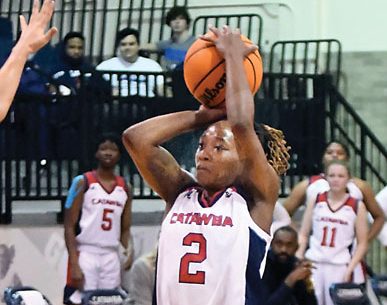 Look pretty bad for a while. Figure it out. Turn it on defensively. Win.

The undefeated and nationally ranked Indians (22nd in the official poll, but higher in others) took care of UVA Wise 86-78 at Goodman Gym.

It didn’t look good for a while. UVA Wise (3-8, 3-6) scored at will in the first quarter. Early in the second quarter, UVA Wise forward Kalee Johnson had 20 points on 9-for-11 shooting, the Cavaliers were shooting 59 percent as a team with minimal turnovers and the Indians (11-0, 8-0) were down on the scoreboard by double digits.

A steal and a 3-pointer by veteran Taisha DeShazo started the turnaround. Then Janiya Downs and Shemya Stanback got going with a flurry of steals, rebounds and layups.

Jada Davie made a 3-pointer off a Stanback assist for a 45-44 halftime lead.

Catawba trailed for the last time at 74-73 with 4:49 left. That’s when Sara McIntosh tied it with a free throw.

A steal and layup by Stanback put Catawba ahead to stay. Then Stanback grabbed a defensive rebound and made a jumper for a four-point lead. DeShazo made a big 3, and the Indians were on their way.

Catawba’s big advantage normally is in the turnover column. This time it was rebounding. The Indians had 17 offensive rebounds.

UVA Wise shot the ball quite well — until the fourth quarter, when the visitors were held to 37.5 percent.

Stanback, who shot 9-for-13, stuffed the stat sheet again with 22 points, seven rebounds and four assists. Downs had 15 points and 10 rebounds. DeShazo made four 3-pointers and scored 16. McIntosh scored 14. Ashley Roberts had another pivotal game off the bench with 10 points and six offensive rebounds in just nine minutes.

Johnson scored 33 for the Cavaliers.

Catawba’s schedule has been light. The Indians own eight wins against teams that have losing records. They beat a Belmont Abbey team that is 5-5 and they’ve won against two middle-of-the-pack SAC teams — Lincoln Memorial (6-5, 4-4) and Limestone (8-3, 5-3).

The Indians have yet to see Anderson, Wingate or Carson-Newman. Those look like the other three serious contenders for the SAC championship.

Still, it has been a perfect pre-Christmas run by the Indians for the finest start in program history.

They’ll head to Anderson on Jan. 5 when action resumes. They’ll also visit Tusculum before they host Carson-Newman, the preseason SAC favorite, on Jan. 12.

A last-second loss at Wingate on Dec. 5 could have been devastating, but instead it’s proven to be energizing for the Indians.

Catawba routed UVA Wise 101-78 at Goodman Gym on Saturday. The Indians have won three straight since that Wingate loss.

No matter who you’re playing when you can score 101 while making five turnovers, you have a chance to be pretty good.

Shorthanded early in the season, when Caleb Robinson and Trevion Lamar had to carry heavy loads, Catawba continues to add reinforcements and has some depth now.

Shooter Michael Hueitt was activated recently. Big guard Bernard Pelote made a devastating return to action against UVA Wise, making his season debut with 27 points and 10 rebounds in 22 minutes.