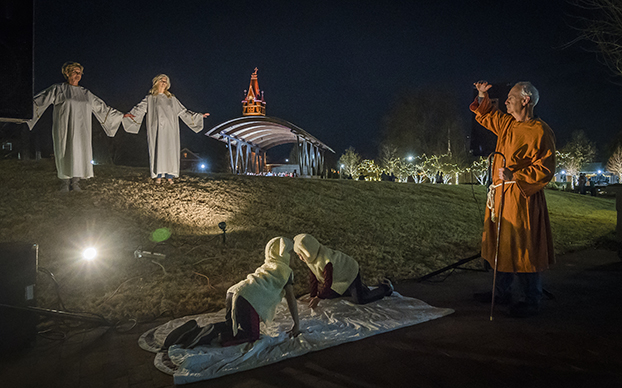 SALISBURY — With folks wearing shorts and T-shirts, it may not have seemed like December, but the warmth of the holiday season came from lots of hugs with hearty greetings of “Merry Christmas!”

The Rev. Dr. Mark Conforti, senior pastor of First United Methodist Church, created a podcast visitors could listen to along the route.

“All of the pastors recorded scriptures associated with their vignettes,” Conforti said, as Aryan Facemyer — dressed as an angel, passed out flyers with a QR code.

When asked about his goal for the evening, Conforti answered, “community, warmth, and fellowship. People are now comfortable being out and about, and maybe they’ll make a new friend in Downtown Salisbury during this beautiful time of the year.”

In front of First United Methodist Church, the appropriately named Gabriel Webster and his younger sister, Addie, were dressed as angels.

“Do not be afraid,” Gabriel said.

The Annunciation of Mary took place at the entrance of First United Methodist Church. The Wise Men stood at the Church Street side of St. John’s Lutheran Church, with the Star of Bethlehem and approaching camels projected onto the yellow brick walls. The Nativity was just around the corner at St. Luke’s Episcopal.

At the entrance to the park, friends met, sharing hugs and holidays greetings, catching up after a long time apart.

Eight-month-old Joanna Musser Gritter may have been the youngest visitor. She came with her parents, the Revs. Josh and Lara Musser Gritter, co-senior pastors of First Presbyterian. She seemed to be the church’s most popular member, as her parents were stopped multiple times on the way to take her home. Joanna didn’t seem to mind.

As the choir sang “Silent Night,” Cpl. H. Shue with Salisbury Police Department said it truly had been a silent night.

The choir ended the evening with “Joy to the World,” and invited all to join in.