Quotes of the week: ‘Made a lot of kids’ days’ 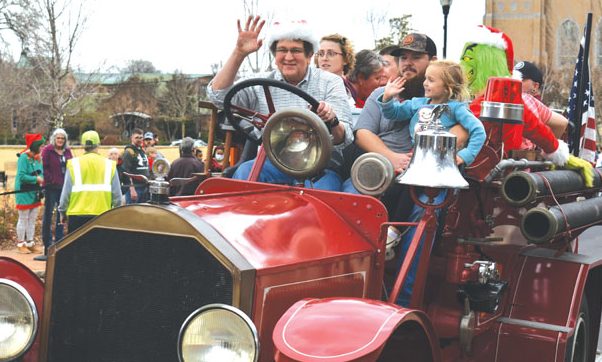 Neil Wilkinson waves while driving Chris Casey and his daughter, Aurora, and the rest of their family through downtown Salisbury on an antique fire truck. The Grinch joined them for the ride, but there was another antique truck carrying passengers with Santa. Ben Stansell/Salisbury Post

“I think we’ve made a lot of kids’ days today.”

“We must be alarmed if there is any group with very low percentages of third-grade reading.”

—  Tony Watlington, RSS superintendent on efforts to narrow the performance gaps between minority and white students

—  Toni Megliorino, former First Union employee on a return trip to where she worked before Bell Tower Green Park took the place where her bank was located

“This building will give Cannon Ballers fans even more to look forward to on game days and every other day of the year, and we’re excited to offer residents one more reason to come downtown.”

“I have an attraction sometimes to places other people are overlooking.”

—  John Lambert, on plans to build homes on more than 30 lots he has purchased in East Spencer

“I always love coming to Salisbury. … It is a place where there’s nature and arts and culture and history all going on at the same time, which is great.”

“I really believe we lost a tremendous man.”

—  Liliana Spears,  on the death of Pastor Bill Godair of Cornerstone Church

“I can tell you there were many, many times … where my initial gut ‘this is how I’m going to approach this’ was changed based on either testimony or comments from other council members. And if you dig in, you’re going to miss that.”