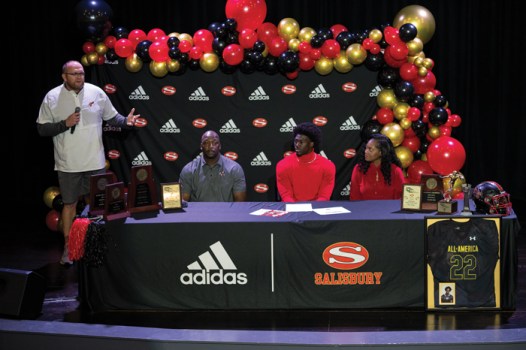 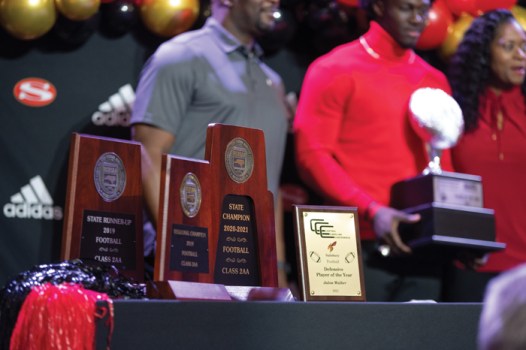 Josh Bergeron / Salisbury Post - Trophies noting Jalon Walker’s and Salisbury High School’s accomplishments sit on a table as he poses for pictures with WSOC’s player of the year award in the background. 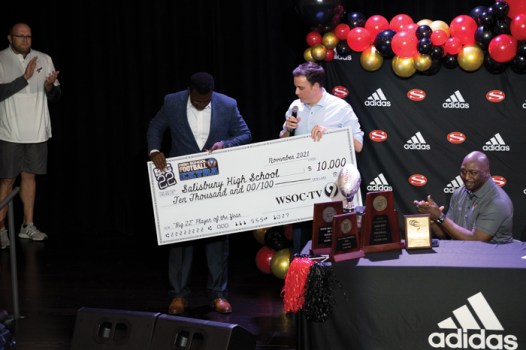 Josh Bergeron / Salisbury Post - WSOC’s Phil Orban, right, presents a check to Salisbury High School in conjuction with an award for Jalon Walker being the TV station’s player of the year. 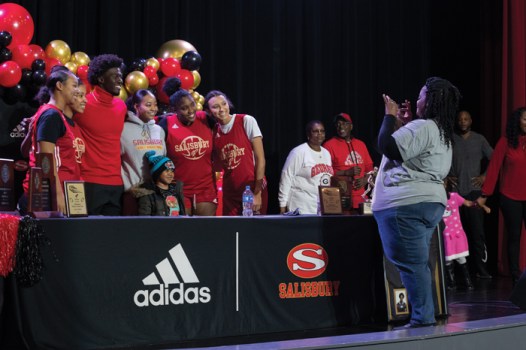 Josh Bergeron / Salisbury Post - Jalon Walker poses with members of the girls basketball team and a young fan Thursday after a signing event. 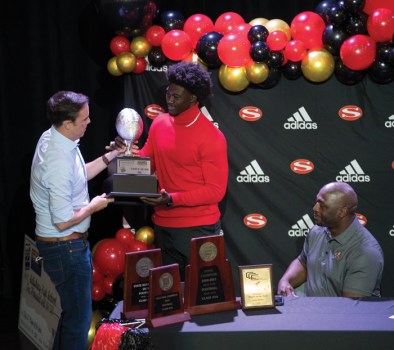 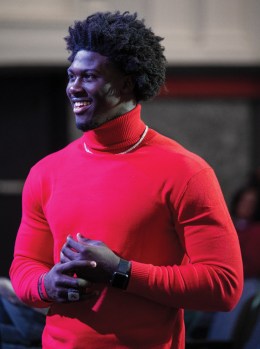 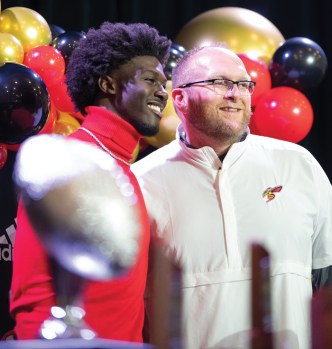 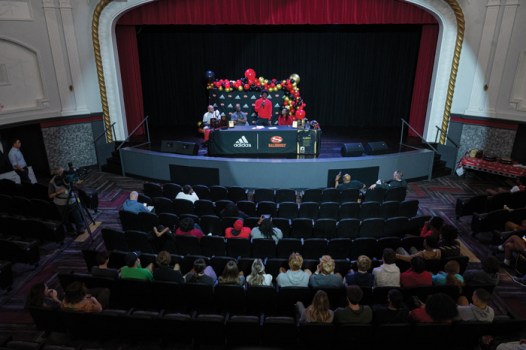 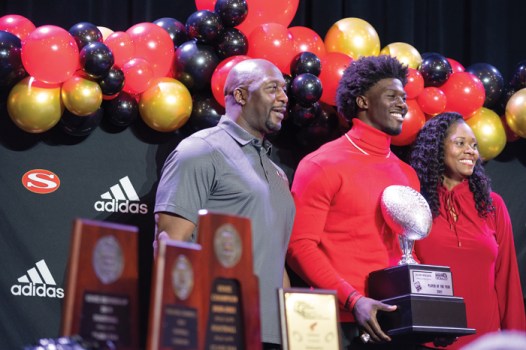 SALISBURY — Stud linebacker Jalon Walker picked the Georgia Bulldogs over the rest of the college football world in late March and filed all the paperwork Wednesday morning, but his family and his school still went all out for Thursday afternoon’s “signing celebration.”

“He’s one of a kind,” Salisbury head coach Brian Hinson said. “At this level, a coach is lucky to coach one like that in a lifetime. When your best player is also one of the best students and best leaders in the school, you’re very blessed. He’s the complete package.”

WSOC-TV representatives were on hand in the Salisbury auditorium to announce Walker as their Big 22 Player of the Year and to hand over a $10,000 donation to Salisbury High that comes along with that honor.

Walker, with the posture of a Marine sergeant and with a conservative gold chain draped over his red shirt, spoke like a senator when it was his time to take the podium.

“Today is a crossroads,” Walker said. “It’s like turning a page and closing out a chapter in a great book. I could see today I’ve got a city behind me, and now the next chapter starts. I want to represent Salisbury as well as I possibly can.”

Georgia’s impressive recruiting class is ranked third nationally behind Texas A&M and Alabama. Walker helped pull in some of those recruits personally, becoming a teenage salesman after he’d made his college decision.

He’s a four-star, so even though he was Gatorade Player of the Year for North Carolina as a junior, he’s far from Georgia’s most celebrated recruit.

He may, however, be Georgia’s most polished, most articulate, most marketable and most mature recruit. He’s the prototypical coach on the field who not only understands the game but has the physical ability to get wherever he wants to go. He is viewed as a leader of men, as future team captain material at one of the nation’s power programs.

“It was amazing to see Jalon at last week’s all-star game,” said Curtis Walker, Jalon’s father and Catawba College’s head football coach. “People who had known him for only a week talked about him like they’d known him for years. Even in an all-star game, his teammates flocked to him. They followed his lead.”

The advice Walker got from his father before the Carolina Bowl was to “keep out of the piles.” In other words, don’t risk injury from someone falling on him.

He came through the game unscathed and with a sack and six tackles and with his reputation enhanced a bit more.

Now he is preparing for the Under Armour All-America game, sort of a pre-college showcase for the best of the best.  The nationally televised game will be played in Orlando on Jan. 2.

Only the top 35 players nationally can be “five-stars,” but Walker hopes to add another star next to his name after he gets to Orlando.

“That game is going to be a big challenge for me, a great test of my skills and knowledge,” Walker said. “Still working on that fifth star.”

Curtis Walker knew early that his oldest son, who now is 6-foot-2 and 220 pounds, was loaded down with athletic gifts. He could have been a state champion jumper in track and field. He was a game-changing rebounder and defender in varsity basketball. He was good in soccer as a youngster.

But the football coach was elated when it became clear Jalon’s love would be football.

“He dove into football with both feet and with great commitment to excelling at it,” Coach Walker said. “So talented, but he also worked so hard. He set goals and went after them with great effort. Athletically, academically and socially, he did everything that he could do and he’s always done things the right way. It’s been a great journey to get to here, and now he’s ready for what’s next.”

Asked if it was going to be tough coaching Catawba football on those Saturdays when Jalon was playing in monster games for Georgia, the coach smiled.

With his oldest son headed to college, Walker turns most of his attention now to his younger son, Deuce, a 5-foot-10 sophomore cornerback/receiver who received an early offer from Charlotte.

Coach Walker’s parting words of advice for Jalon were “remember who you are.”

As the last of the well-wishers departed the auditorium, Jalon took a deep breath and moved on to that next chapter.

The recruiting grind was a draining one. It’s meant a lot of smiles and handshakes, speeches and thank yous, but it’s over. He’s now officially a Georgia Bulldog, and he’ll be enrolling in January. His days as a Salisbury Hornet are now just part of history.

“The last few months really have been like a job,” he said. “But you should always enjoy your job. I’ve enjoyed this one.”