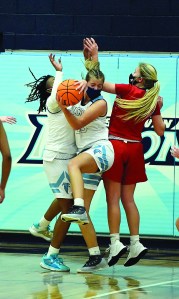 East’s Hannah Waddell battles for a rebound against West Rowan. Photo by Wayne Hinshaw, for the Salisbury Post.

GRANITE QUARRY — The only Rowan girls team that lost on Friday was East Rowan, and the Mustangs went down to the wire in Granite Quarry.

Sophomore Hannah Waddell made eight 3-pointers and scored 30 points for East, but Lake Norman Charter still escaped with a 53-49 victory.

“She shot the lights out,” East coach Bri Evans said.

It was the first South Piedmont Confernce win for Lake Norman Charter (4-2, 1-2), which had lost big to Carson and had dropped a tight one against Central Cabarrus.

East is 3-4 and is 1-2 in the league. East beat Concord and lost to Northwest Cabarrus.