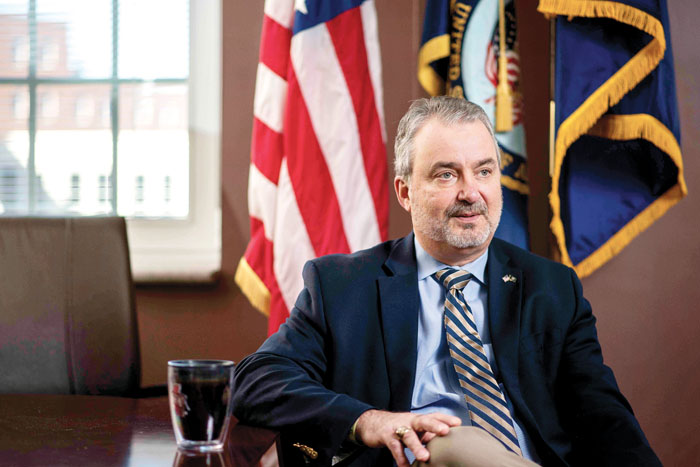 Joseph P. Vaughn at the Hefner VA Medical Center campus in Salisbury. Vaughn is leaving for a new position in the VA. Jon C. Lakey/Salisbury Post

Vaughn has led the Salisbury VA system since early 2018. As executive director, he oversaw operations at the 484-bed W.G. Bill Hefner VA Medical Center at 1601 Brenner Ave. and clinics in Charlotte and Kernersville. During his tenure, the health care system has made improvements in overall hospital ranking and patient trust scores. Its Community Living Center, which houses long-term residents, has been rated five stars for quality for seven consecutive quarters.

“I’m very proud of what we’ve been able to accomplish during my time here,” Vaughn said in a news release. “From improving patient satisfaction scores to expanding services for our veterans, we worked together as a team and I couldn’t be happier with the results.”

The decision to leave Salisbury ultimately came down to family for Vaughn. A native of Mississippi, he’ll be 15 minutes away from his daughter and two hours from the rest of his family.

“Proximity to family made the offer really difficult to turn down,” Vaughn said. “However, I will take great memories with me from the Salisbury VA Health Care System. I’ve gotten to know and develop relationships with many of our staff. They have made it a pleasure to come to work each day and I know they will continue to accomplish great things.”

An interim director is in the approval process and an official job posting will be forthcoming, according to VA spokesperson Todd Goodman.