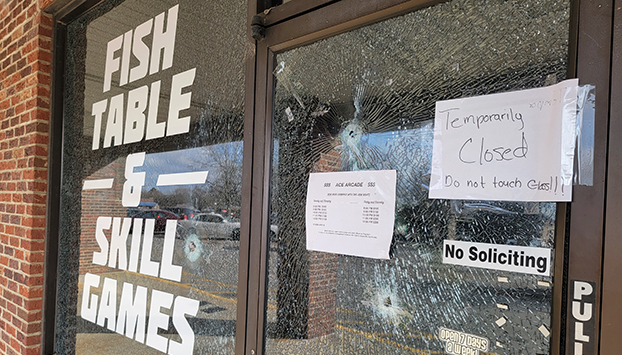 Bullet holes in the front of the Ace Arcade on Statesville Boulevard. Josh Bergeron / Salisbury Post

SALISBURY — A Statesville Boulevard fish arcade was the victim of an attempted armed robbery and a shooting hours apart late Thursday and early Friday.

At about 8:30 p.m. Thursday, five men wearing hoods and face masks entered the store at 2092 Statesville Blvd. with guns to try and rob the business, which the Rowan Sheriff’s Office says is an illegal gambling establishment. They’re called fish arcades because of the animals pictured in the games that provide payouts.

When the five men entered the business, Ace Arcade No. 1, they told occupants to get on the ground, said Sgt. Russ DeSantis of the Salisbury Police Department. The man inside the business who reported the robbery pulled out his own pistol, which prompted the group of five to flee the business.

Nothing was taken. There were no injuries.

At 2:30 a.m. Friday, Salisbury Police again were called to the business because a man shot through the front glass multiple times. DeSantis said video of the shooting showed a man fleeing on foot. He wasn’t able to provide the video Friday morning.

No injuries were reported in the shooting incident.

DeSantis said the attempted robbery and shooting remain under investigation. It’s too early to know whether they were related, DeSantis said.