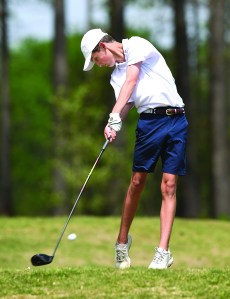 West Rowan student McGwire Owen had a recent hole-in-one at Warrior. Photo by Wayne Hinshaw, for the Salisbury Post.

The tournament uses a modified Texas Scramble format, with teams selecting the best tee shot from among the four players. From that point, each player plays out his own ball.

Riding a red-hot Ryan Honeycutt (he made six birdies on the inward nine), along with well-timed birdies from his teammates (Wheet, No. 12), Beard (Nos.  11 and 17), and Kip Honeycutt (No. 11), the winners shot a blistering 12-under par on their final nine holes to edge by  one shot defending champions Steve Gegorek, Michael Gegorek, Grey Medinger and Barry Medinger and the team of Alan Barefoot, John Mark Trexler, David Holshouser and David Dorsett, as well as the team captained by Mickey Landreth and Barry Curlee.

Fourth place went to the three-generation McIntyre family team of Steve, Dwayne, Robin and Brady at 13-under par, followed by the team of Gary Fesperman and the Millers (father Gary and sons Justin and Caleb) at 12 under.

“The greens were excellent, but you had to try and keep your approach shots below the hole or you could quickly three-putt or even four-putt,” Ryan Honeycutt said. “We had a couple downhill putts where the hole got in the way. After that, I think our entire team’s confidence grew. We will enjoy the win and look forward to defending our title next year.”

Skilled ball strikers of local renown Kris Jimenez (No. 2), Steve McIntyre (No. 5), Robin McIntyre (No. 13) and Chip Comadoll (No. 16) took home closest to the pin prizes.

This year’s tournament was dedicated to the memory of James Poe, a popular and very memorable local golf legend.

With donations from the tournament participants, Corbin Hills Golf Club, Chad Campbell and the Country Club of Salisbury, Bob Timm and Carolina Golf Mart, and Kip and Ryan Honeycutt with GMC Glass, the  tournament raised a record $2,500 for The Salisbury Post Christmas Happiness Fund.

McGwire Owen made his first hole-in-one on No. 6 at Warrior on Tuesday. Witnesses included Chris Owen and Tinsley Merrell.

The McCanless Couples played a Captain’s Choice on a chilly, but beautiful Sunday.

Low gross score was a 77 shot by John Struzick.

He was playing with Mel Smith, Bob Turner and Carl Moore.

In the 8Ballahoopinsider boys basketball poll, Central Cabarrus is No. 1 in 3A.

North Rowan is ranked fifth in 1A. Lexington is ranked 12th in 2A. In 4A, Lake Norman is seventh and Mount Tabor is eighth.

High School OT posts a top 25 poll for East and West regions without regard to classification.

Salisbury’s girls are ranked 10th in the West, while Carson is ranked 18th.

The keynote speaker is David Bennett. Alumni remarks will be made by Bill Butts.

Doug Rice will be the master of ceremonies. Buddy Poole will make a guest appearance.

Robinson led the Catawba Indians to a  victories  over Limestone and Lenoir-Rhyne.

Against Limestone, Robinson had 42 points and 10 rebounds. He  became just the fourth player in Catawba history to score 40-plus points in a game.

Robinson added a 19/10 double-double against L-R.

Ethridge helped his team win the 5A state championship game as a junior with 17 points.

He averaged 17 points, nine rebounds, and six assists for Pines Charter and  played for Team Florida 17U on the AAU circuit.

Bryanna Troutman (Salisbury) scored 20 points on 8-for-13 shooting as Wingate’s women romped 91-59 over Queens on Wednesday. Troutman had 7 rebounds.