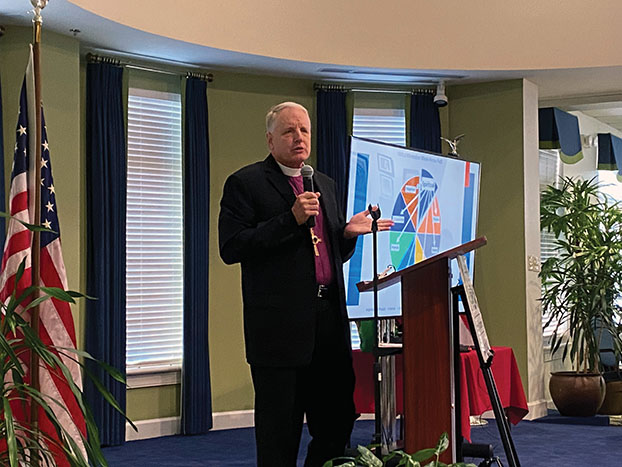 Bishop Tim Smith spoke about the importance of diversity, equity and inclusion during the Rowan County Chamber of Commerce's Power in Partnership breakfast. Ben Stansell/Salisbury Post

SALISBURY — Bishop Tim Smith was in the third grade when he looked out of the window at his family’s home to see a burning cross placed in his front yard.

Smith’s family relocated to Rowan County from Lenoir less than two weeks before. It was 1968 and they’d moved because his father landed a job as director of instruction for Salisbury City Schools and was charged with helping desegregate the school system.

Staring at the fiery cross, Smith asked his mother what was happening.

“I remember looking out the window and my mother lying to me, but at the time it was a comforting thing,” Smith said. “I said, ‘What are they doing?’ She said, ‘Well, they want us to know that they believe in Jesus here too. So, they brought us a cross.’”

Smith told that anecdote at Trinity Oaks on Thursday morning while encouraging Rowan County’s business leaders to foster diversity, equity and inclusion in the community and their companies. Smith, bishop of the North Carolina Synod of the Evangelical Lutheran Church of America, was the keynote speaker for the Chamber of Commerce’s December Power in Partnership breakfast. The event was sponsored by Family Crisis Council, Meals on Wheels Rowan and Rowan Helping Ministries.

Although the overt racism Smith then-unknowingly witnessed as a child is less common today, Smith said there is still plenty of work to be done to improve racial relations.

“It seems to me one of the real issues is that we seem more racially segregated now than we did 50 years ago,” Smith said. “I don’t know if that’s your experience or not, and maybe it depends on what we’re talking about.”

Smith started his speech by highlighting why diversity is important, first using examples from the natural world.

“The natural world in its diverse way helps sustain each other,” Smith said. “If you’re all the same and if you breed something, we see it in dogs when they’re bred too purely, they produce all kinds of problems. They can’t hear, they have joint issues and everything else. It’s the mix of diversity within even our genetic makeup that helps us be stronger.”

Knowing he was speaking to business-minded people, Smith turned to a financial example.

“You might have everything you own in one stock,” Smith said. “If you do, I‘ll stand here and tell you you’re foolish. You might be lucky at the moment, but we’re told to diversify our portfolio.”

To improve diversity, Smith laid out a strategy for people to follow, although he prefaced it by saying he is not an expert. Smith said people should make themselves aware of their privilege and reflect on what that means. Smith then said people should train on how to be more inclusive and then implement structural accountability in their organizations to ensure that it happens.

Smith specifically encouraged businesses and nonprofits alike to promote diversity among their leadership.

“Let’s face it, on a lot of boards, we tend to like to attract people to be on our board who have money and can give money. That’s all wonderful and necessary, but they also have people who they can reach out to who will give money,” Smith said. “If we’re serving an underserved community, is that underserved community that we’re serving equally represented on our board? It’s kind of a challenge piece, because if not, are we missing a real opportunity?”

Smith said it is a simple and important step to put “somebody up front” who is representative of the community. He included the Lutheran Church as an organization that needs to do a better job of promoting representation to achieve more inclusivity.

When asked by Chamber President Elaine Spalding what businesses can do to better support everyone in the Rowan County community, Smith highlighted action taken by Cheryl Goins, owner of Pottery 101. Goins faced pushback last year after placing a large “Black Lives Matter” sign in a prominent window in her downtown shop, which overlooks the Square.

“I think that there are ample opportunities in the area of diversity, equity and inclusion to be bold,” Smith said.

The next Power in Partnership will be held on Jan. 20 and be an economic outlook for 2022. A week earlier on Jan. 13, the chamber will host its annual gala titled “Our Future Shines Bright.” The gala will be held at 6 p.m. at West End Plaza and will feature a passing of the gavel from 2021 Chair Bob Honeycutt to 2022 Chair Brad Walser.